We, The Church Militant, May Not Quit The Spiritual Battle

My blogging colleague at Dymphna's Road put up a piece today entitled "Screaming in Pain".  Truth be 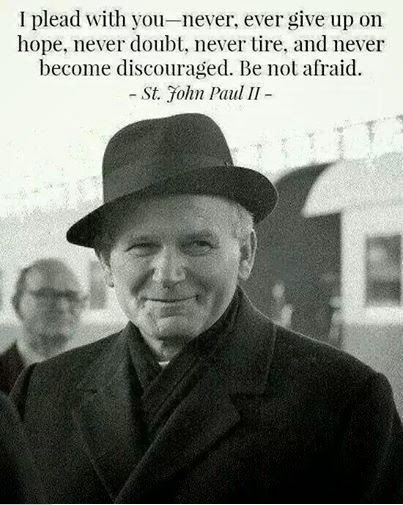 told, I've seen a lot of defeatist attitudes among bloggers and other fellow Catholics.  Some are confused over the foibles that issue forth from the Vatican.  They are sincere Catholics wanting to be loyal to the Church, but owing to the lackluster post-Vatican II formation they have received, they do not understand that not every utterance of the Holy Father constitutes dogma.  The Holy Father can be incorrect in matters of prudential judgment and it is only healthy to acknowledge it.  Truth be told, the "three monkeys" approach to the Holy Father's gaffes (exemplified by ChurchMilitant.tv) has exacerbated this confusion since viewers might interpret such silence as tacit approval of Papal blunders.

Still, when I read that article, I cannot help but sense that these distressed individuals are knowingly preparing to cut off their noses to spite their faces.  They sense some leaks in the Barque of Peter.  So if they fear possible drowning, will they really jump ship and undergo definite drowning - and even risk eternal damnation?  (Yes, ladies and gentlemen!  If you go "sedevacantist", you greatly increase your chances of going to hell!  If you wish to avoid hell, you will stay with the Roman Catholic Church, no "ifs ands or buts"!)    Even if we take lousy Catholic education into account, this attitude is bereft of all logic and common sense.  With all due respect, Dymphna is restrained in her advice to such tempted souls - restrained to a fault, I daresay.  You don't tell such individuals to "wait", for that holds out the notion that after a "waiting period" it's acceptable to commit a mortal sin of apostasy.   We tell them the unabridged and plain truth about what is emanating from the Vatican.  We also tell them - in no uncertain and overly "gentle" terms - that if they continue to nurse notions of leaving the Roman Catholic Church that they jeopardize their eternal salvation.  Then we tell them, in no uncertain terms, that they must reject any discouragement and thoughts of leaving the Church as the filthy tempting lies of Satan that they are. 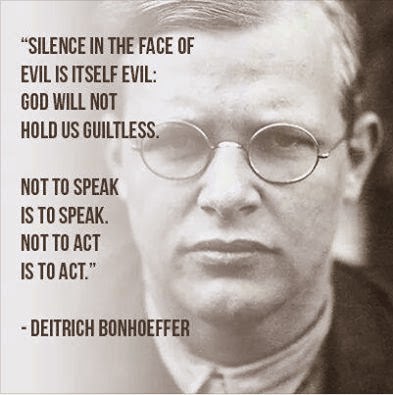 Now let me say a word to some of my fellow bloggers who are flagging or who have in fact quit (I know who some of you are!).  I'm speaking as a blogger myself who has experienced many of the tribulations that come with that job.  Either we've been called by God to proclaim His truth over this media - or we haven't been called by God.  It's one or the other.  If we've been called by God to speak some truth - what makes us think we're at liberty to quit at will?  Let me preface by making clear that some have had to lay aside blogging to attend to duties regarding our states in life; perhaps we have to attend to sick family members or children who need us.  We have our priorities and no one will gainsay that.  I'm addressing those who quit because they're "tired of fighting".  Dymphna speaks of those who've decided to "tune out".   This is mind-boggling for several reasons.

First, let us remind ourselves of what St Catherine of Siena had to say regarding the need to speak out against evil: "We've had enough of exhortations to be silent!  Cry out with a hundred thousand tongues!  I see that the world is rotten because of silence!"  Those once-stalwart bloggers who have decided to quit and "tune out" are now adding to the silence that is contributing to the rot of the world, if not damnation of poor souls who will no longer benefit from their truthful voices.  Either we're part of the solution - or we're part of the problem; there is no middle or neutral ground.  Moreover, on this side of the grave we remain the Church Militant, not the Church Moribund.  We get to retire when we die and join the ranks of either Church Triumphant or Church Suffering - and not split second beforehand.

Now what is leading to all this jaded cop-out?  Frustration?  Anger?  Lack of faith?  What's going on?  I cannot pretend to read minds/hearts, but I do know there's something terribly amiss when those who were engaged in spiritual warfare throw up their hands and walk away.  Let's deal with it, shall we?  To put in another way, you'll deal with it either now or in Purgatory, but you WILL deal with it.  That's the same with any sin to which we have attachment.

I could go on, but I think we get the point.  Keep on persevering.
Posted by Restore-DC-Catholicism at 8:32 PM