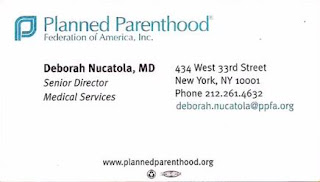 A top Planned Parenthood doctor has been caught on video admitting that Planned Parenthood sells organs and other parts of babies that they murder.  She states plainly that she tailors her own abortion techniques to derive specific organ samples from her murder victims.  The doctor's name is Deborah Nucatola.  Her card is to the right.  As she speaks in the video about her murder techniques, one can imagine her sharing a pint with nazi doctors of a few generations ago.

Some are calling this revelation "breaking".  It isn't; we've known for years that abortionists were selling baby body parts.  However, this may be the first time a major abortion perpetrator has admitted to the practice.  Planned Parenthood has entered into damage-control mode; I understand that Nucola's twitter page has been deactivated.

Both Bobby Jindal and Ted Cruz announced initiatives to investigate Planned Parenthood for their engagement in this practice.  Where are all the other political leaders - that is, the ones who aren't already in the pockets of Planned Parenthood?

Here is the video, courtesy of Center for Medical Progress.

Posted by Restore-DC-Catholicism at 9:21 PM