Some Words Of Plain Truth To NeverTrumpers

Ladies and gentlemen, we're getting down to the wire - the election will occur in four days.  While Hillary's campaign seems to be imploding upon itself thanks to the wikileaks and of course to much prayer, she might still squeak into the White House.  Some #nevertrumpers have been opining that Trump could never win; that does not seem to be such a foregone conclusion anymore.  We can still keep Hillary out of the White House; but only if we all cast our votes for Trump.

Some #nevertrumpers are still living in fantasy land.  They won't accept the fact that their efforts will only ease the way for Hillary to win; some do, but they remain obstinate in their disdain of Trump.  Evan McMullin, one of the "third party" candidates running, makes no bones of his desire to stop Trump even if it means Hillary will ascend to the White House.  A pro-life person whom I know wrote a piece that seems to be an apologia for withholding support for Trump; quite frankly it is shot so full of logical fallacies that it will require its own blog piece to refute that.

I was listening to Mark Levin yesterday.  I didn't catch the entire segment of his show but he asked #nevertrumpers a question.  Come election day, there will only be two alternatives, third-party pipe-dreams notwithstanding.  On that night, whom do you want to see be the victor?  Honestly?  Of course when I ask these questions, I'm not addressing them to erstwhile pro-life leaders who have deluded themselves into actually voting for Hillary.  I pray that God will shake them out of their dangerous delusions in the next three days before they dare affirm the candidate who has promised to promote baby-murder in this country.

Some former #nevertrumpers have awakened and have smelled the coffee.  While they may find him to be abrasive (as do I) nonetheless they do understand that there is a world of difference between Trump and Hillary as far as morals/platform/agendas goes.  I pray many more wake up.  On this blog I have made the case, from the vantage point of Catholic moral theology that not only may a Catholic vote for Trump, but given the circumstances he/she must vote for Trump. 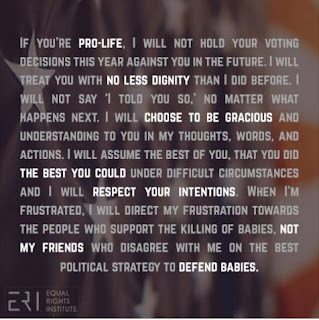 To the left is a rather insipid meme that is making its rounds through facebook.  On the surface it sounds nice and conciliatory, but I believe its author jettisoned logic for sentimentality.  Look at the first sentence.  If that is to mean that we should not bear in mind an incredible irrationality on the part of nevertrumpers when determining whether or not they can be trusted, that sentence is itself a suggestion to sin against prudence.   Let's look at "respect your intentions".  It's not enough to mean well; we must do well.  The phrase "the road to hell is paved with good intentions" comes to mind.   I announce this right now.  Should Hillary win and she proceeds to wreak havoc on what's left of our republic, you may rest assured that I will be rebuking - sternly and often - those who denied their votes to Trump for whatever persnickety reason they have concocted.  In denying their vote for the only meaningful opposition she had, they will have assisted her rise to power.  They will have on their hands the blood of each child who will die as a direct result of Hillary's presidency.  Rest assured, I will be loaded for bear - and that goes double for those who have said that they'll vote for Hillary!

Nevertrumpers, I post below another priest's homily with words of reason and wisdom.  Please listen and ponder, not only for the sake of this country but for your own immortal souls.

Posted by Restore-DC-Catholicism at 9:50 PM