Rehumanize International - A Veritable Snake In The Grass

On Facebook I noticed that some pro-life friends of mine, highly respected, "liked" an outfit called Rehumanize International.  If you go to that page, you'll see that they oppose abortion, euthanasia, and other intrinsic evils.  They also oppose capital punishment and nuclear armament, which are not intrinsic evils.  Ladies and gentlemen, when both categories are mish-mashed together in one list, my "seamless garment" red flags start flying.  Therefore I did some research.  Regrettably my suspicions about RI's moral base are confirmed.  Notice that there are intrinsic, anti-life evils that they don't list: contraception, homosexual lifestyle, attacks on marriage and family. 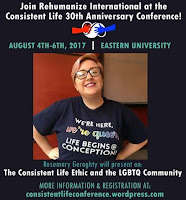 It appears that some of their leadership are caught up in those last three moral evils.  On their home page, go to "about", then "our team".  Their "New Media Coordinator" is Rosemary Geraghty.  The picture to the right, from her facebook page, seems to indicate where she stands on the mortal sin of homosexual conduct.

In that picture, observe the logo with the red and blue hands.  It is also incorporating the logo of the Consistent Life Network.  Go to the bottom of that page and notice that they were formerly known as the Seamless Garment.  Go to their endorsement page.  Quite a few pro-life leaders endorse this bunch.  However, a few anti-God names can be found there; Fr. Theodore Hesburgh and Richard Rohr being among them.  For the life of me, I cannot understand how Dale Vree, editor of New Oxford Review, could have endorsed this bunch.  In addition to Geraghty's speaking at the CLN event, Aimee Murphy is on the CLN advisory board; she's also executive director of RI.

Member organizations of CLN are most troubling.  In addition to several socialist groups, you'll see many chapters of the wildly dissident Pax Christi.  Sojourners is also very dissident.  Right smack-dab on their home page is a denunciation of the Nashville Statement.  In a screed about the Charlottesville riots, they stated "all white people need to understand that white supremacy is underneath everything in America".  Of course they lack the common sense that would have told them that their own statement is blatantly racist.  Pardon my French, but is this really the sort of sh*t to which prolifers want to link their good names?

Back to the RI leaders, we see Maria Oswalt, the Layout Editor.  Her facebook page reveals that she supports the "Black Lives Matter" thugs, excusing their violence and mayhem because - unlike the white supremists, they have "legitimate grievances".  I kid you not.  Here's her rant from her facebook page.  If it's too small to read, just click on it to open it in another window and enlarge it.

Aimee Murphy, the aforementioned executive director of RI, also engages in this brand of racism on her own facebook page, to the right.  These two state that only white people can be racist. Of course that fallacy is itself racist.  I could understand if they condemned the violence espoused by the Black Lives Matter thugs, but they outright excuse the violence by the latter. A reasonable person could look at the statement to the right and ask, "if blacks don't condemn the BLM violence, are they too anarchists?".  Odd how that question isn't broached!  The stances of Oswalt and Murphy are racist, or quite likely hypocritical, perhaps to satisfy the demands of some well-heeled progressive donor. 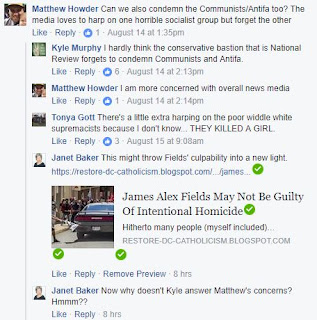 Kyle Murphy is their Accounts Manager (whatever that means).  He's also Aimee's husband.  He too posted racist screed on his wall.  An interesting discussion ensued between him and a reader who raised some common-sense questions.  The bottom two comments are mine.  I left them yesterday.  This morning I saved a screenshot of this exchange for I suspected that they'd soon be deleted.  Lo and behold!  That "suspicion" must have been Divine inspiration, for my two comments have since "disappeared"!  Imagine that!  Of course it's his wall and he can delete what he wants, but doesn't that indicate extremely thin skin on his part, or perhaps a realization that his own bigotry wouldn't withstand rational examination?  Hmmm...

Here I'll post a video that delves into violence that seems to be the modus operandi of the Soros-funded Black Lives Matter bunch.  Below that I have some closing remarks.


Links to some others here and here

I've got other facebook shots that show this RI crowd to be for unbridled immigration, against our Second Amendment rights, etc.  When you consider that in light of the issues described above (dissident on homosexuality, suspiciously silent on contraceptives) you have a progressive organization.  Granted, they oppose baby-slaughter, assisted suicide and embryonic stem cell research.  So does the USCCB.

John Whitehead's constant references to CLN on his own facebook page, along with the other connections, almost causes me to suspect that this RI may be a front for CLN. Even if they aren't officially linked as organizations, their members most certainly are disciples of the late Cardinal Benardin and his now-debunked "seamless garment".

IMHO, faithful Catholics should avoid this "Rehumanize International", "Consistent Life Network" and any other organization that adulterates proper opposition to intrinsic evils with other issues that are more proper to the realm of prudential judgment (at most).  As we've seen once again, these attempts to dilute our defense of Church moral teachings are often deliberate.
Posted by Restore-DC-Catholicism at 10:44 PM