If a parent steals something and gives it to his/her child, is the child penalized when he/she is compelled to return the stolen goods or make other reparation?  Common sense - and Catholic moral theology answer "no", for the child should never have come into the possession of the goods in the first place.  Let's add another dimension.  Say the child receives the contraband as a minor, then becomes aware of the theft when he reaches the age of majority.  Is he/she required to make restitution?  Again, the answer is yes, for he/she may not knowingly accept benefit from the commission of sin.  Should they do so, they themselves become guilty of cooperation with the sin of their parents.  I link now to a post that I created several months ago; therein is a video that explains the nine ways in which a person can become an accessory to the sin of another, thus incurring guilt for his own sin.  Bear all this in mind as you read the account below.

We all know that President Trump has decided to undo the patently unconstitutional stunt initiated by the Messiah Most Miserable known as DACA (Deferred Action for Child Arrivals).   Compare the screed spewed from the USCCB to the statements issued by both the White House and the Department of Homeland Security.  While those impacted are children of illegal immigrants, it is important to note that they are now adults as opposed to non-emancipated minors.  They are now responsible for their own lives.  If they haven't taken measures to correct their own immigration status, they have no one to blame for the consequences but themselves.

I became aware of this account of a "dreamer priest", Father Rey Pineda, through a facebook friend of mine.  As I read this account, I detected no trace of him trying to rectify his status.  He went to school in Georgia and then discerned a vocation; "he felt God was calling him to be a priest but his spiritual path was blocked.  He was a dreamer".  Excuse me, but isn't part of priestly preparation to remove moral impediments from one's life?  He knew he was here in disobedience to legitimate national laws: laws that have basis in Section 2241 of the Catechism of the Catholic Church.  Now recall the video that I mentioned in the first paragraph, and count the ways that Father Pineda actively cooperates with the sin that his parents committed:

Other ways that he might be cooperating with the sin of evading US immigration laws would be counsel, provocation, praise.  We cannot say "silence" is a chosen means of such cooperation, for he is quite strident in his crowing about his sin. 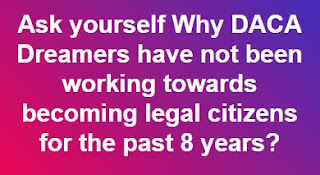 So his deportation would be a loss to his flock?  Really?  Who would really seek him out in the confessional, knowing he doesn't give a whit about legitimate civic law?  We Catholics are called to obedience to such laws and not only when convenient.  The sacrament itself would be efficacious since it doesn't depend on the worthiness of the minister, but his counsel might be suspect.

One troubling aspect about the hierarchy's embrace of progressive positions is that church authorities too often strike hands with politicians who foment the Culture of Death.  Father Pineda did precisely that by his partnering rabidly pro-abortion Dick Durbin.  Thanks to Pineda's own celebration of his sin, he lent to Durbin a credibility that the latter simply doesn't deserve.  By the way - this is the same Dick Durbin who questioned the Catholic faith of an Appeals Court Nominee.  Got that?  Durbin is very supportive of the Catholic faith of a potential puppet, but takes a dim view of the Catholic faith of a Trump nominee.  That's whom Pineda - this shill for illegal immigration - helped to legitimize.

Let's get back to DACA and illegal immigration in general.  If you haven't yet, please read the linked press releases of the USCCB, White House, and DHS.  If you noticed the USCCB waxing hysterical, you are quite correct.  I won't rehash it all, but the USCCB and Catholic Charities are funded by the feds.  Part of that funding has to do with the number of immigrants - including illegal - that they process.  The amount of funding is based on headcount!  Yes!  If the number of illegal immigrants in this country declines, so too does the amount of funding that the Church hierarchy receives.  Maybe the USCCB's overly-vaunted concern for "the strangers we must welcome" is not completely altruistic.

DACA as promulgated by Obama was patently unconstitutional.  Congress needs to act on this matter, and act first and foremost for the citizens whom they represent - who voted for them and who pay their salaries.
Posted by Restore-DC-Catholicism at 9:46 PM