So Much For Accompanying In The San Diego Diocese!

Bishop McElroy of the Diocese of San Diego has hosted "listening sessions" for the benefit of those Catholics in his diocese who are troubled by the sex scandals.   Well, for the benefit of some Catholics.  McElroy has evicted several faithful who have brought up failings of McElroy himself - including the retention of a sodomite in prominent positions who lives in gay #mowwidge.

Church Militant has obtained footage of one such ejection and has exposed another.  Lepanto Institute recorded the ejection of a woman who rebuked the retention of a sodomite as a diocesan employee.  The latter caused McElroy to go into a royal hissy fit as he had her forcibly ejected. 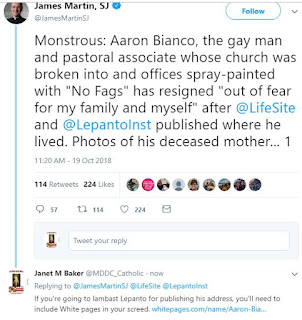 The Lepanto piece delved more into the background of Aaron Bianco, the sodomite occupying several positions of influence.  Lepanto pointed out his address: an address that is available to anyone who googles his name.  I tried it myself and here's the link.

Father James Martin, infamous dissident, is one not to let a good crisis go to waste.  Get a load of his tweet.  He did relate some good news: that Bianco resigned.  In reality, Bianco should have been fired long before this.  Notice how Martin intimates that Lepanto and LifeSiteNews hunted down Bianco's address and maliciously published it?  Again, I myself found it in 20 seconds just by googling his name.  Martin also tried to implicate Church Militant with responsibility for the church vandalism: something for which he has absolutely no proof.  Here's the link to his tweet.  Please open the entire thread.  See how he tries to ascribe responsibility for the tire-slashing to Church Militant?  Teensy problem for Martin: the tire-slashing happened last year, before this expose.  CM has replied that Martin may find himself with a defamation suit on his hands.  I for one hope CM goes for it.

Martin also calls for the "reporting" of faithful Catholics who rebuke those in mortal sin.  He is of the same nazi-esque mindset as McElroy, who gives faithful Catholics the heave-ho from his "listening sessions".  Only dissidents and/or perverts are to be accompanied.  Maybe that's just as well because I for one would not want to accompany them on their current hell-ward direction.
Posted by Restore-DC-Catholicism at 11:38 PM