The Traditional Latin Mass, And All The Church's Patrimony, Threaten The Pope And His Progressive Agendas

Let's recap events of the past few weeks - events that involved the attempts to quash the Mass of the Ages.  Cardinal Cupich effectively suppressed the Institute of Christ the King, evicting them from their Chicago church for which their congregation raised  $4 million  after a 2015 fire damaged it.  Meanwhile in Inverness IL, at Holy Family Catholic Community (site of the guitar blessing) a lay person gave the homily at Pentecost Mass and soon afterwards, the whole place erupted in dance music and blowing bubbles.  To date I have heard nothing of Cardinal Cupich bringing this bunch to heel.
He has no words of admonishment for Father Pfleger either, after this latest debacle of a mass.
A similar injustice happened in Benedict, MD after Cardinal Gregory's tyrannical edict;   Those attending the Traditional Latin Mass there raised $250k for renovations and decorations.  Now they will have to go elsewhere to attend the Latin Mass.
Any honest person can only surmise that those trying to suppress the Latin Mass are simply full of spite.  Yes, that includes the pope.  Read this and this to see how some faithful Catholics are calling out this obvious pettiness and hatred.  There is quite a succinct comment on social media regarding the fanaticism with which the pope is grinding his axe against the Traditional Latin Mass.  It reads:
Have you noticed how often, in the last 18 months, the pope’s off-the-cuff comments have focused on traditionalists? There are 50 grave problems in the Church that need major papal attention, and THIS is what smolders on his mind constantly? PF's priorities are clear in this: to heck with all those other problems. It’s the 1% traddies who need to be 'dealt with', not the 99% of dreadful masses, the 99% of heretical 'catholic' colleges, the 99% of degenerate bishops, etc. Even if traddies were wrong in loving Tradition, his inattention to the vastly larger problems is mind-boggling."
This obsessive and seemingly disproportionate campaign against the traditionalists is in fact perfectly logical. Pope Francis realizes that the only effective resistance to the modernist remake of Catholic doctrine, morals, and liturgy is coming from this zealous minority, who have shown every sign of growing numbers and influence. Remember, it is creative minorities who change the course of history, not the majority who float along with the spirit of the age.
What is at stake is not merely "liturgical preference" but the dogmatic structure of Catholicism, the historical-theological continuity of the Church, and the soundness of Christian morality. His tactical hits in all of these areas show that the ultimate aim is the transformation of the Catholic Faith into something quite, quite other than it has been.
That is why our opposition to his entire agenda, which has TC as its poster-child, must be inflexible, determined, and indefatigable, and why "obedience" must be tendered only to what is true and good, not to what is false and wicked.
Actually only the first paragraph is the viral comment.  The other paragraphs are the thoughts of Peter Kwasniewski.  So there is a broad attempt to tear down all Catholic worship and teaching - including morals.  Eric Sammons echoed similar theories.  The interview to which Sammons alluded can be found here.  By the way - notice what he said about "true doctrine progressing".  Now remember how the pope erroneously, and probably sinfully, condemned the death penalty as intrinsically evil?  I opined then that he was floating a trial balloon with that, to see how Catholics would react, given that many of them are themselves confused about the death penalty.  Apparently he was pleased enough with the results of that experiment to start broaching contraception.  If he does, by some Jesuitical verbal trickery, manage to hoodwink the faithful into thinking that contraception might be acceptable in some circumstances, we'll have deadly history repeating itself.  We'll be having the 1930 Lambeth Conference all over again and that could actually lead to the horrors of baby-slaughter being condoned by Church hierarchy.
One would hope that would be enough for some timid souls in the hierarchy to declare Francis an imposter to the papacy.  Note that I am not a sedevacantist for I do not believe Benedict's "resignation" to have been properly performed.  My blogging colleague at Les Femmes posted on the situation in her home diocese of Arlington, site of one of the recent draconian attacks on the Faith.  She challenges her priests, as I do the priests in my own Archdiocese of Washington, where Cardinal Gregory has been chomping at the bit for his turn to beat down faithful Catholics.
We laity have a responsibility to positively resist, too.  Prayer and fasting are necessary, but by no means sufficient.  Ora et labora.  I post below a note from another Arlington Catholic to the chancery. 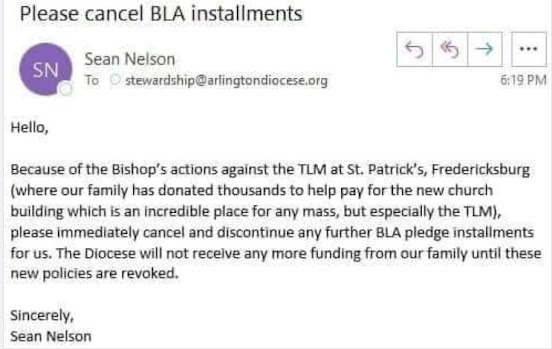 One language the corrupt bishops understand and heed is money.  We must use ours to good advantage, and sometimes one must starve the beasts.  Not one more red cent to these wolves in shepherd's clothing.  It's high time we stop kissing the hands that slap us and rob our children of their patrimony.
Posted by Restore-DC-Catholicism at 11:05 PM