Attack The Traditional Latin Mass, Attack Life And Civilization Itself

"I believe that were it not for Holy Mass, at this moment the world would be in the abyss, unable to bear up under the mighty load of its iniquities."  St Leonard of Port Maurice

"It is easier for the world to exist without the sun than without the Holy Sacrifice of the Mass." St Padre Pio

Frankly, I'm not at all certain that many Mass-going Catholics appreciate the truths voiced by these two saints (and probably other saints as well).  Otherwise, I really don't see how they could be so blasé regarding the attacks on the Traditional Latin Mass.  If they appreciated the importance of the rituals, genuflections, use of the sacred language of Latin, etc, they wouldn't be so careless and sloppy regarding the Novus Ordo Mass, let alone the Traditional Latin Mass.

One class of people do understand the importance of the Mass as laid out by Pope St. Pius V in Quo Primum.  That is, those who are working tirelessly to dismantle the Sacraments, Doctrines and other aspects of the Church's patrimony.  It is the progressive clerics (and/or their puppet-string pullers) as they seek to bring about this "great reset" and the resulting "new world order".

I believe that Desiderio Desideravi was released to stymie the graces flowing from the Traditional Latin Mass.  There can be no other reason for the vindictiveness that lies in every word in that document.  Even the Washington Post, no bastion of tradition and conservatism, was taken aback by the harshness in which Cardinal Gregory is implementing this deadly directive. 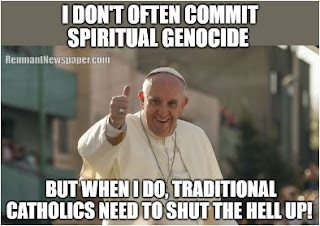 One Peter Five published a series of articles by Jose Ureta, who analyzed DD.  He noted that it was a step in the same direction initiated in Vatican II, where there was less focus on the Passion and Death of Our Lord in favor of the Resurrection.  It doesn't take much of a theology degree to understand how that minimalizes the harm done by sin.  One obvious consequence is the mindset that sin is seen as something that need not be avoided - a complete departure from past - and correct - understandings of sin.  It also reduces the importance of the priest as "alter Christus" and overly exalts the role of the laity.

Recall the principle "lex orandi, lex credendi, lex vivendi".  Recall also that the Mass is the most sublime worship we offer God, and that the Eucharist is the Source and Summit of our Faith.  The anti-God forces know what they are doing when they attack the Mass of the Ages.  It's high time faithful Catholics woke up and faced the truth so they can act accordingly.

Posted by Restore-DC-Catholicism at 12:24 AM