I generally don't go to Saturday evening Masses, as the Vatican II council stipulated that such Masses were only to be attended when emergency prevented attendance on Sunday, the preferred day. Occasionally, such circumstances do occur. On Saturday, Sept 19th, I had need to attend the 5pm Mass at St. Rose of Lima in Gaithersburg, MD.

Many years ago, when I worked on Firstfield Road, I would attend daily noon Mass there. I quickly discovered the left-wing proclivities of the clergy present at the time. It didn't take long for me to notice that the assistant priest was engaged in "polticially correct" editing of the readings, substituting those nasty male sexist pronouns for more, uh, "acceptable" alternatives when referring to Jesus. The pastor's descent into liberal la-la land was worse. He would "invite us to gather around the altar" at the time of the Canon and Consecration. I and another traditionally-oriented person would remain in our pews. One day, after one of his invitations, the pastor stopped Mass to mock us - from the altar - for remaining in our pews. We both stood (or more accurately, knelt) our ground. I understand that things have changed for the better. 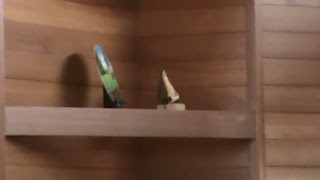 When I walked in, this is the first thing that I saw. These items are not much more than nik-naks that one might find adorning a bookshelf. The left thing appears to be a decorative dish stood on its side with a prop. At any rate, there is nothing about that display to inspire worship or at least thought about Our Lord. In fact, except for the Stations of the Cross (which were decent enough) and a strange crucifix, there was not one statue in the Church. 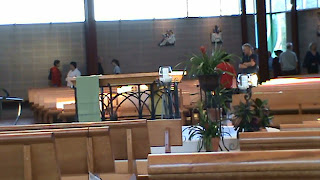 The church building is essentially one big circle. The pews are arranged in a full circle - not semi, but full - circle around the altar. Th alter is that strange-looking table in the center, raised on a platform. A strip of platform goes back to the end of the church where the tabernacle is. Note that everything - altar, flower pots - seem to be perched on wrought iron. I can only hope that there is indeed an altar stone under the linen. 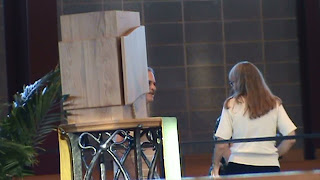 Here's the tabernacle. As I said, it's made of wood and it's rather nondescript. Canon law 938 S 2 states that "the tabernacle...is to be situated in some part of the church that is distinguished, conspicuous, beautifully decorated and suitable for prayer." This tabernacle is none of these. As mentioned before, the church pews are all in a circle. The tabernacle is towards the back. There are pews with their backs to the tabernacle as they face the altar. Notice in this picture the woman with her back towards Our Lord in the Blessed Sacrament as she chats with someone else.

I'm happy to report that while the readings were read, there was no substitution of "inclusive language" as in years past. There was way too much applause during Mass, and of course at the sign of peace, everyone trotted everywhere. The priest left the sanctuary, as he's not supposed to do. However, given the structure of the church, it is difficult to tell where the sanctuary ends.

As I left Mass and pulled away, I did notice a car with an Obama sticker on it. This didn't surprise me. I left on that car a Wisdom on Windshields flyer and hope that the owner took it to heart. By the way - download your own copy of that flyer and have them handy when you go to Mass. You never know who may need some solid social-teaching catechesis, especially with the 2010 elections looming near.
Posted by Restore-DC-Catholicism at 8:14 PM