Conduct Unbecoming The Vice President Of The United States

Can you just imagine the hoo-ha that would be resounding from the Washington Post, New York Times and other mainstream-lamebrain media outlets if this were a picture of Paul Ryan snuggling up to a woman other than his wife? 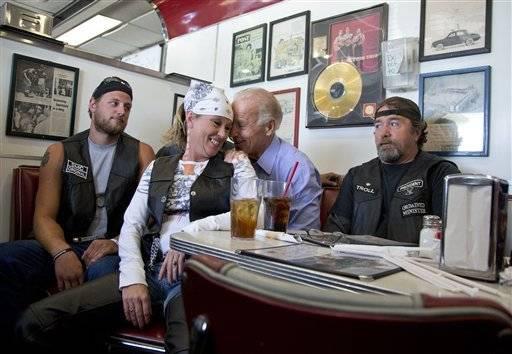 The above scene occurred yesterday during a campaign stop in Ohio.  Ladies and gentlemen, if outrage would have ensued if this were a picture of Ryan (and rightly so), how much more should have arisen from such conduct from the current Vice President of the United States?  Bill Clinton, serial womanizer that he was (still is?), at least took some measures to hide his disgraceful conduct.  He showed some shred of shame.  Biden is too much of a fool to have even that much discretion.  Is this the sort of individual who should be "one heartbeat from the presidency"?  Oh - I almost forgot!  Biden is ostensibly a Catholic - one who is old enough to recall the concept of mortal sin.  I suppose I can be forgiven for forgetting that he's Catholic, as apparently he forgot so long ago.

Notice the looks of the two men on either side of Biden.  They're disgusted, and I'd be willing to bet that they'll remember Biden's lecherous behavior on November 6th.  I hope we all do.
Posted by Restore-DC-Catholicism at 10:25 PM