When The Pope Calls Evil "Good" And Good "Evil"

That is essentially what happened in the Pope's homily today.  He took the occasion to (again) vilify faithful Catholics as "rigid" and therefore "heretical".  Read this LifeSiteNews report, along with commentary.  He claims to decry an "all or nothing" attitude that he perceives in us, forgetting that Our Lord Himself often took an "all or nothing" stance, particularly when it came to obedience to His immutable commandments. 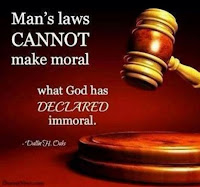 Last November, in a plane interview (Yep!  Pope Francis and planes are a bad combination!), the pope seemed disinclined to view the usage of condoms in light of the Fifth and Sixth Commandments.  First He cited the pharisees' question, "Is it lawful to heal on the Sabbath" as a roundabout way to justify using condoms to prevent the spread of aids.  What he fails - refuses to understand is that there is a world of difference between "healing" (a good act) with usage of condoms (inherently evil act as it frustrates God's intentions for sexual relations).  The latter can never be justified.

He then segues into a screed about what he calls "big wounds": social injustice, environmental injustice, etc.  His remarks during his interview are really quite explicit.  To summarize, the pope - chief shepherd of the Church, can't be bothered with mortal sins of the flesh, even though they most likely will cause the eternal damnation of millions.  These poor souls don't amount to a hill of beans when it comes to this "social gospel".  He shows that he has his priorities exactly ass-backwards.  Please read the above link thoroughly, for it is an excellent treatment on why each person must conform to God's moral demands before he/she can even begin to address "social issues".

About six weeks ago, Msgr Charles Pope offered commentary on wise words uttered by Cardinal Robert Sarah during an interview, detailing why the concept of the "social gospel" is complete anathema to the true Gospel of Jesus Christ.  At about the same time, the Cardinal spoke at the National Catholic Prayer Breakfast.  He warned that "today we are witnessing the next stage and the consummation of the efforts to build a utopian paradise on earth without God."

Regrettably, the pope's poo-pooing of the immutability of God's commands and disregard for the same in preference to focus on temporal matters seems to be part of these "efforts to build a utopian paradise on earth without God."  If we are to counteract this spiritual poison, it is vital that we not be cowed by attempts to marginalize us as "rigid" and even "heretical".
Posted by Restore-DC-Catholicism at 10:56 PM