By now most people heard about today's shooting at a gay nightclub called the Pulse in Orlando Florida.  Fifty people were killed and another fifty or so wounded.  Local police killed the gunman, Omar Mateen, an American citizen born to Afghan parents.  The FBI is investigating this as an act of domestic terrorism and stated that Mateen bragged about his ties to Islamic organizations.  The Islamic State is claiming responsibility for the shootings.

Clash Daily investigated Mateen's voting patterns and discovered that he was a registered Democrat.  I mention this only to showcase the foolishness of some ACLU lawyers who are immediately laying blame for this massacre on the GOP and the "Christian right".  They accuse the latter of creating an "anti-queer climate" while conveniently ignoring the Koran's call for the execution of homosexuals.

Other progressives are making similarly politically correct noises in complete disregard of the Islamic terrorists who are bragging about their commission of this slaughter.  Joy Reid of MSNBC is carping on gun control as she opines that the core issue is "how easy it is to get a gun".  Earth to Joy!  Earth to Joy!  Might it be ever so possible that the Islamic State armed Mateen?  There are indications that indeed a terrorist organization did direct the massacre. 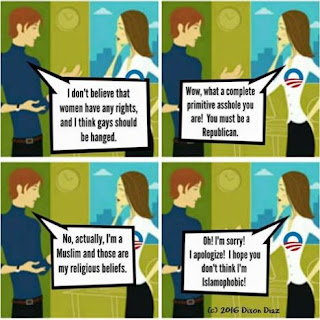 Of course the Messiah Most Miserable got in on the act.  In his own shilling against guns, he asked "if that's the kind of country we want to be".  Well, if we don't want to be that "kind of country", we need to acknowledge the Islamic cancer for what it is - something that progressives are loathe to do.  It's high time that the United States wakes up to this jihadic plague.  How long will we ignore the obvious?  For all their heinous faults, the jihadists are more honest than many in US leadership about the impetus behind these acts of terrorism.

We must also address this matter from another angle.  As mentioned earlier, the attack took place at a gay hangout.  It's therefore all too reasonable to surmise that many were engaging in mortal sins.  Let us pray that at least some of those found the grace of perfect contrition before they died so that they could at least attain eternal salvation.  Sodomy is one of the "sins that cries to heaven for vengeance".  Of course the murders cannot be condoned, but did we see some of that vengeance today?
Posted by Restore-DC-Catholicism at 11:05 PM