Matthew Kelly Is At It Again

Matthew Kelly, who runs an outfit called "Dynamic Catholics", has apparently come up with another gimmick to sucker Catholics into buying his wares.  He has dubbed this one as the "Best Lent Ever". 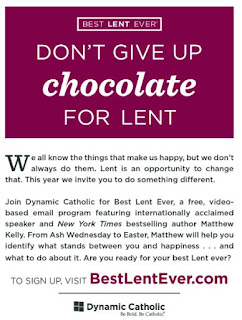 Long time readers of this blog will recall that I've sounded alarms about previous stunts of his.  He has written books that contain serious errors regarding faith and morality; I've detailed these problems.  FYI, I've sent emails to him regarding these errors, hoping to gets some sort of clarification or even correction of these problems.  I've yet to receive the courtesy of a reply.

I'm seeing signs like the one to the right in parishes in the DC area.  Now think about the arrogance that is all over the language in this poster.  Kelly has the chutzpah to say that his program will give to its users their "best lent ever"?  Moreover, he dares to make jokes about the time-honored tradition of mortification and self-denial, holding them to be inferior to his dubious programs?

The attitude communicated in this poster is at best flippant and smart-alecky: two attitudes unbecoming the Catholic who purports to offer spiritual benefits.  Please don't reward this snarky behavior.  Pass up this dubious offer and stick to the Church's time-honored prescriptions for Lenten penance and reform.  They are the three activities described in yesterday's Ash Wednesday Gospel: prayer, fasting and almsgiving.  Of course be certain to make a good Confession this Lent season.
Posted by Restore-DC-Catholicism at 3:51 PM