In the parish bulletin today was the flyer that you see to your right.  At first glance it might look like quite a lovely event, but a thorough reading of it revealed a "community-organizing" stench to the whole thing.  I googled the name "Greg Hlibok".  Even as I was still typing the letters of his name, scores of links appeared; that is quite often an ominous sign.  Sure enough, it was. 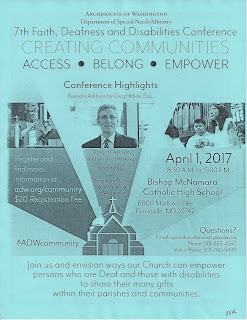 Hlibok, himself deaf, attended Gallaudet University during the late 1980s.  In 1988 the president of the university resigned and some students were adamant that a deaf person be appointed president.  When that didn't happen, they engaged in vandalism, blockading the entrances with hot-wired buses and burning effigies of the new president, carrying on until their demands were met.  Hlibok was one of the leaders.  Regrettably, the Gallaudet Board of Trustees played the cowards and capitulated to the students' temper tantrums.

At the bottom of the flyer we read, "join us and envision ways our Church can empower persons who are deaf..."  Given the despicable conduct of Hlibok and his cronies as described in the previous paragraph, does the local Catholic church really want to promote - even if only tacitly - the antics of that "Deaf President Now" bunch?

Let's look at it from another perspective.  What the "Deaf President Now" did in its conduct of those riots at Gallaudet almost 30 years ago is really quite Alinskyian, is it not?   Moreover, it is a microcosm of the #notmypresident riots that broke out in many cities just after Trump was elected president - again Alinskyian.  The Archdiocese of Washington, with Hlibok giving a keynote address at one of its functions, is giving a "thumbs-up" to progressive organizations who engage in civil unrest when elections results are not what they desire.  The message that they communicate is that it is ok to bully others to get what you want.  Of course it isn't; such conduct is sinful.  Unless there is evidence that Hlibok repented of this sin, he has no business addressing Catholics.
Posted by Restore-DC-Catholicism at 3:09 PM