Corona - Cover For Deconstruction Of The Faith

Let's be blunt, shall we?  This corona situation is making plain that some prelates hold the Faith and eternal salvation as cheap commodities, if they believe at all.

Let's examine the latest nonsense to come from Cardinal Blaise Cupich of Chicago.  Recently he stated that baptisms must be postponed and that emergency baptisms would require his approval to be done.  Ponder the idiocy of that statement.  The word "emergency" in the context of a baptism would mean that there is imminent danger of death, most likely that of an infant.  In that case, hours and even minutes count.  How much time would be wasted to secure his approval?  By that time, the one to be baptized would be dead, forever locked in orignal sin and thus not to be admitted to the Beatific Vision.

Do you consider my use of the word "idocy" to be harsh?  In reality, that is mild, for it could more accurately be called "cold-hearted indifference" or even "malice".  Of course I don't presume to know his current spiritual state so we'll just stick with the more objective term "idiocy". I might point out this is just the latest episode that demonstrates Cupich's cavalier treatment of the Faith. 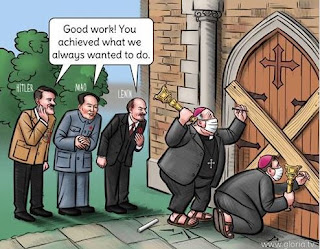 Then there's the Sacrament of Confession.  I noted with happiness that some pastors, mindful of their sacerdotal responsibilities, have instituted "drive-through" confessions as a means to administer the sacrament while satifying the draconian secular directives.  But some bishops aren't satisfied.  Thinking more like lawyers and insurance agents, they are putting the kibosh on even that.  I speak of Cardinal Tobin of Newark.  At least he allows it in the case of "extreme emergency".  I've written quite a bit about Tobin in the past.

Now let's look at these two instances.  One involves Baptism, the other Confession.  These two sacraments are known as "sacraments of the dead".  That is, they are the only two sacraments that those not in a state of sanctifying grace may receive.  Reception of these is necessary not only to allow the recipient to receive the other sacraments, and more crucially, allow for entrance into heaven.  Without being in a state of sanctifying grace, in God's ordinary providence that isn't possible, unless an act of perfect contrition can occur.  Do we see how insidious this is?  Do we see how the devil is chuckling with glee over these derelictions?  Of course it's quite likely that the devil himself motivated these prelates to issue their unconscionable pronouncements.

Oh, but there's more.  Bishop James Checchio of the Diocese of Metuchen NJ pities us poor suffering Catholics!  He thinks we are already suffering so much that he is suggesting that Catholics slack off with their Lenten exercises.  He has said that Catholics may now eat meat in Lenten Fridays.  I think it's worth noting that the Diocese of Metuchen is a suffragan diocese of Newark.  In other words, the aforementioned Cardinal Tobin is Checchio's boss.  In times like these, don't we need more prayer, fasting and almsgiving?

So here we have it.  Progressive prelates are doing all they can to choke off God's graces to His Church and thus to the world.  Is it at all possible that this had been their dream all along, and that the covid-19 situation simply provided an excuse for them to plausibly do so?
Posted by Restore-DC-Catholicism at 9:08 PM