A few days ago, according to Catholic News Agency, Cardinal Gregory condemned the violence that happened in the Capitol on Wednesday.  He opined that the Capitol is "sacred ground".  Of course that's a major theological blooper, but perhaps he was just confused, seeing how he shuttered the real sacred places, that is, the Catholic Churches of the Archdiocese of Washington - but I digress!  We're glad that he condemned that violence, although Catholic News Agency engaged in poor journalism by not acknowledging Antifa's likely role in it.  However, the Cardinal's words of two days ago stand in stark contrast to abject dismissal of the riots perpetrated by Black Lives Matter and antifa two months ago.  Remember that?  He was "sorry" that it happened, but he didn't condemn those rioters, who did kill quite a few people.  Instead, he understood what "energized" them.  What "energized" them was rank hatred stoked by the Marxists who run BLM and antifa.  So what did Cardinal Gregory unwittingly admit then? 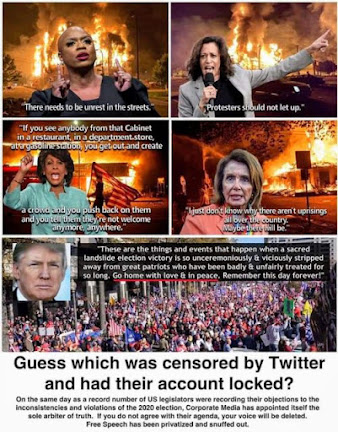 An another display of hypocrisy, we recall how Cardinal Gregory issued a statement regarding the death of George Floyd last summer.  For that matter, so did many of the US bishops. I agree that the treatment Floyd received at least hastened his death from the drugs already floating in his bloodstream.  It is only common sense to realize that kneeling on someone's neck for 10 minutes is way over the top.  But so is shooting an unarmed woman in the neck.  That is precisely what happened to Ashli Babbitt on January 6.  Should she have been climbing in that window?  No!  However, that is no cause to shoot her, despite the cop's whining that he "had no choice".  In Maryland, if I did that to someone breaking into my home, I would be arrested on manslaughter charges.  Yet leftwing pundits are quick to excuse the reckless police officer who killed her, whereas they condemn the killing of Floyd.  But..Floyd was black and Babbitt was white, although they were both killed by out-of-control cops..  I daresay that we are seeing a blatant case of reverse racism.  Regrettably Cardinal Gregory, by his deplorable silence regarding Babbitt's killing, evinces the same racism. Is that his motivation?
Posted by Restore-DC-Catholicism at 6:09 PM