Are Some Traditional Catholics Becoming Wimpy And Sappy?

The Remnant is known as a bastion for faithful traditional Catholics and generally brooks no nonsense from clergy who shirk their sacerdotal duties.  Last week I came across this article in the electronic edition of the Remnant, and it has me scratching my head.  I link to it now and ask you to read it - and the comments.

In a nutshell, a priest in Brazil regularly offers the Traditional Mass.  In keeping with those rubrics, Holy Communion is offered to the faithful on their tongues as they kneel.  On Ash Wednesday an unruly man entered the church during Mass.  He was disruptive throughout.  The ushers did nothing and let him continue.

When the time came for Holy Communion, the man refused to receive on the tongue.  Father ended up acquiescing to his demand for Communion in the hand.  He refused to consume the Host and began to shout and act out more.  At this point the congregation restrained him; in the meantime the man crumbled the Host, with Fragments of Our Lord's Body strewn on the floor.  It appears in the article that Father was mortified and I trust that means he learned from his errors.

I wish I could say the same for the discussion moderator (employed by Remnant, I assume) and some of the commentors.  They were all too ready to excuse the dereliction of duty on the part of both the ushers and the priest.  Judging from the language that the moderator used, I believe the moderator is a woman.  I cannot imagine a man engaging in a "poor Father!" type of pity party. It's bad enough when women get caught up in such emotions that they won't deal with the root issues (and I'm a woman, by the way) but it's downright disgusting when men engage in such maudlin talk.

Below the jump break I'll give you some snippets from the comments: things you can find for yourselves.

What is majellan advocating?  Situation ethics?  Is he/she saying that we shouldn't examine issues from all aspects?  How else are we supposed to learn for the future?


Now here's my first comment, and the sniffing I got from the moderator.  Note the "poor Father" language. 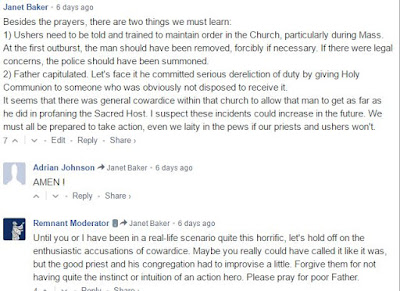 I attempted to reply to the moderator but my reply was not allowed.  I post it in red below.

"Improvise"? They did nothing until the Host was in the guy's hands, although they've had plenty indications that something was amiss. As far as "intuition of an action hero", that quip was just plain silly. What of the intuition of a priest and the knowledge of his sacred duty to protect Our Lord from sacrilege? As for the "real-life scenario", do you recall five years ago how a priest of the Archdiocese of Washington was expelled from the Archdiocese for denying Holy Communion to an avowed lesbian? That was my parish. Father Guarnizo fulfilled his responsibility, as did the parish itself when we had reason to suspect that gays would try to commit sacrilege a week after the incident. Cardinal Wuerl and his minions, on the other hand, behaved despicably; for that I and others rebuked them publicly. Getting back to this situation, no amount of "horrific" can excuse the lame behavior of all that congregation until they finally tackled the guy. What's done is done. Let's learn from that situation because it is repeating itself. If we try to excuse the lapses of duty we will prevent ourselves from learning to be prepared. Of course we pray for Father.

Notice this common theme between "majellan" and the commentator.  That is, "unless we've been faced with similar decisions, we've no right to comment on the morality of given actions.  Given that assumption, will the Remnant be closing down operations?  They certainly do comment on clerical derelictions - and rightly so.  Ms. Moderator, if you are reading, please be advised that if you or I or anyone else engaged in the same conduct as did Father and the ushers, the immorality of that conduct would still be the same.

The moderator's reply to another Catholic was, quite frankly, sarcastic and disrespectful.

I didn't understand the "Steven Seagal" reference until I googled the name.  Apparently he's a martial artist.  I attempted to come to Mr. Ketterer's defense.  Again my reply wasn't allowed.  It is below in red.

Would Jesus have aided and abetted the sacrilege?

Stuff like this could be expected from the Not-At-All Catholic Reporter, but the Remnant?   I reached out to Michael Matt on his Facebook page and hope he corrects this matter.  Perhaps this is just a flash in the pan, but if some squishiness is developing, it's best to nip it in the bud.
Posted by Restore-DC-Catholicism at 10:49 PM