On Wednesday I posted the sad news that Father James Martin, Jesuit heretic (was that redundant?), was appointed as Consultor to the Vatican Communications Office.  Cal-Catholic informs us that Martin will be handling the Pope's twitter account.  Well, Martin certainly is prolific with his tweets, so no one, not even the pope, can claim ignorance of his heresies.  To wit:


Martin retweeted a complete botch-job of the story of St. Patrick.  He is not to be likened to an illegal immigrant sneaking across our borders.  He was captured as a slave and brought to Ireland against his will.  As for being "undocumented", his capture and enslavement was probably quite legal, relative to the laws of the Irish chieftans of the time.  This lame attempt to justify amnesty for illegal immigrants would be quite humorous if people were more educated regarding Church history and less inclined to swallow that tripe "hook, line and sinker".

Here is a tweet of Martin's, that someone saved.  It no longer appears in his twitter feed.  One can see why he did so, as this would not be the sort of thing that would be an asset on the resume of a Vatican official. 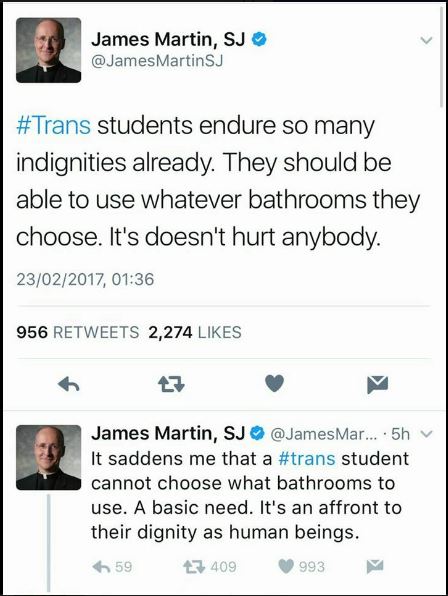 No wonder New Ways honored him.  He is the poster boy for perversion-enabling clergy.  This particular tweet was pulled, but anyone can go to his feed and see all sorts of nonsense.  In fact, while looking for this "trans" tweet, I stumbled on his St. Patrick gaffe.  Anyway, you'll see all kinds of tweets blathering on about "immigrants"(never differentiating between law-abiding and law-breaking), "climate change", even one claiming that Hillary really won the election.  Not once did I see anything dealing with baby-murder or contraception.

Now that Martin will have his hand in papal twitter feeds, they'll probably become even more heretical.  The Vatican knew about this when they brought him on staff.  Now no one can claim that the pope is "at the mercy of poor translators".  He owns this mess.  Instead of cleaning it up, he's dirtying it even further.

This Easter season, pray for wide-spread conversion to the One True Faith within the Vatican walls.
Posted by Restore-DC-Catholicism at 7:00 PM