Blasphemies And Outrages Pouring From The Vatican 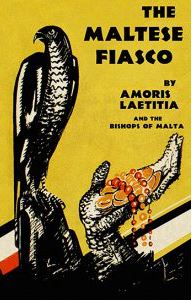 Three months ago, I wrote that the bishops of Malta are allowing divorced/remarried Catholics, that is, Catholics embroiled in the mortal sin of adultery, to receive Holy Communion while continuing with their adultery.  They compounded their sin by ordering their priests, on pain of suspension, to imperil their own souls by thus complying with mortal sin and sacrilege.  What was Pope Francis' response to it?  Why, he thanked them for their interpretation of Amoralis Lamentia.  If nothing else, he at least removed any reasonable doubt as to what he intends Amoralis Lamentia to do.

Just days later comes the news that one of the Maltese bishops, Archbishop Charles Scicluna, is stating that contraception is permissible.  Oh, yes, right now he's stipulating that only married couples should use it, but we see how that worked out in 1930 for the Anglicans, didn't we?  Remember - this is just days after the Pope approved their interpretation of Amoralis Lamentia.  It is reasonable to believe that this lurch into immorality also meets with the Pope's approval.  Has Amoralis Lamentia paved the way for the Catholic version of the 1930 Lambeth Conference?  Remember - at that time, the Anglicans allowed for disobedience to God's commands for sexuality and marriage "only in limited circumstances.  Eighty years later they celebrate baby-murder, sodomy, etc.  They've gone so far as to recognize lesbian "bishops".  God forbid that this poison progresses much further in Holy Mother Church.

But the poison has manifest itself in another, more insidious way.  One Peter Five has news of a troubling homily that the pope gave within this past week.  I ask you to read it in its entirety as it features a translation of the homily by my friend Andrew Guernsey.  Both men are correct in saying how the theology is mostly accurate, but for the gross error thrown in there.  In other words, we're talking of a healthy, nutritious meal laced with just a little bit of arsenic.  In a nutshell, the pope isn't merely saying that Christ took on our sins for our redemption, he's saying that Christ became the devil.  This is both a horrid blasphemy and a logical absurdity.  Let's not kid ourselves.  He knows exactly what he is saying.  While he may wish to hide under the "lovable bumpkin who gets his words jumbled sometimes" veneer, one must admit that excuse is getting rather old.  You might recall that the pope once said that the boy Jesus probably had to beg forgiveness from His parents when He remained behind in Jerusalem.  Last month he joked that "the Holy Trinity is arguing behind closed doors".

Yes, these quips are blasphemous, but they also betray an abysmal lack of appreciation for Who God is.  If that is lacking, is it any wonder that doctrinal errors spew forth from the Vatican on a regular basis?  Without an adequate intellectual and philosophical understanding of God and His Holy Nature, there will be no sound basis for proclaiming the laws dictated by God.  With that kind of willful ignorance at the helm of Holy Mother Church, it behooves us all to pray, frequent the Sacraments and educate ourselves regarding the tenets of our Faith.  We will also have to actively resist error as it slaps us and our loved ones in the face.  Read some words of wisdom from Venerable Fulton Sheen on this topic.  Now I'll end with a recording of a homily regarding Amoralis Lamentia.

Posted by Restore-DC-Catholicism at 11:49 PM