March For Pseudo-Science; With Idea On How Catholic Church Can Really Be Green

This is a "two-part" post as the title implies.  Both parts have as their common theme environmentalism.  First, I'll deal with the junk-science aspect. 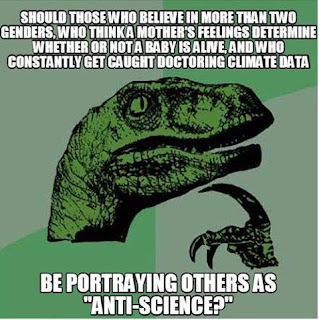 It's obvious from the name that they dubbed for their latest media stunt "March For Science" that these people are in damage-control mode.  They understand that many people in the US are fed up with their bogus, hypocritical claims.  One "case in point" was their protest of the Dakota Pipe Line.  Their protests were ostensibly for the sake of the "environment" but in their wake they left mountains of trash that required a massive clean-up effort.

So now they claim to be upholding the banner of "science"!  Really??  What science?  Well, they hold in high esteem Paul Erlich, author of "The Population Bomb".  Remember that?  That book predicted that we would all starve ourselves to death.  But that mass starvation was supposed to occur at least twenty years ago.  His book might well have been entitled "The Bomb" for his predictions fizzled out.  It's worth noting that Ehrlich advocated abortion and contraception (even forced) to reduce the world's population.

They have the audacity to claim that their "science" is settled, that it is written in stone.  Other distinguished scientists beg to differ.  I've written before on the Heartland Institute and the Cornwall Alliance.  These two organizations have done much to demonstrate the frivolity of the claims of radical environmentalists.  We also salute Lord Christopher Monkton, who speaks truth to the harm done by environmentalism, and in particular to the harm being done by the pope's participation of that hoax.

I link now to one talk given by a so-called "illuminary" of yesterday's pseudo-science gabfest.  Perhaps this speaker didn't realize how honest she was.  She flat out states that "science, arts, etc" will wither away unless the federal government funds them.  Right there we see what that whole cabal wants - more of our money and more of our liberties.

As we've seen before, Pope Francis is in on the hoax.  I no longer believe that he is simply a naive dupe of the progressives.  He is one of them.  I mentioned Paul Ehrlich earlier in this post.  Long-time readers of this blog will note that Ehrlich was invited by the Vatican to give lectures on this topic, as were Jeffrey Sachs and other anti-life people.  We also know that Laudato Si is one giant envirowhacko screed designed to give the environmentalist movement a Catholic veneer.  I now link to one of my older posts that contains two videos that expose environmentalism and its advocates.

So much for my first topic.  Now let's move to the second topic, that is, how the Church can really do something worthwhile for the environment and reduce its carbon footprint.

When many of us go to Mass, we probably use the missalette in the pew.  It's probably made of paper, and is changed periodically, to coincide with liturgical seasons, etc.  Many people who pray the liturgy of the hours probably also use a paper booklet; Magnificat is one of the more popular ones.  Then we also see the various weekly handouts that give the hymns for the day.   Readers, does that not strike you as a considerable waste of paper, not to mention the money to print those things?  Solution?  Return to the use of the missal, the breviary, and the hymnal.  I mean the permanent ones that can be used day after day, year after year.  Yes, it will involve an initial outlay of cash, but think of the savings throughout the years in reduced subscription and printing costs.  As an added bonus, there will be less need to cut down trees.  I've had my breviary set for well over twenty years, my missal ever since the changes promulgated by Pope Benedict XVI.  What do you all think of that?
Posted by Restore-DC-Catholicism at 7:46 PM