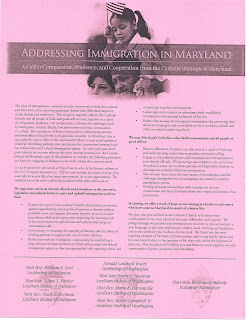 In today's parish bulletin is the thing to the right.  It most likely appeared (or will appear soon) in the bulletins of all Catholic parishes in Maryland.  On the surface, it sounds nice and lovely, doesn't it?  However, what is not said is just as important as what is said.

In its treatment of immigration, the Maryland Catholic Conference continues to obfuscate the immense differences between those immigrants who come to this country by following the established legal procedures for so doing, versus those who enter the country by deliberately flouting those very same procedures.  In other words, the latter group sneaks in, dodging legal authorities.  They are here illegally.  By definition, they become criminals by breaking our laws.  If I were to rob a store or commit an act of vandalism, I too would become a criminal.  One class of crimes does not exempt a perpetrator from the label "criminal".

The Maryland Catholic Conference, along with its USCCB puppet-masters, have long been "front and center" in promoting the progressive agenda of amnesty for illegal immigrants.  Of course these illegal immigrants would both serve to bolster Democrat party votes and undermine traditional American culture, owing to the refusal of many of them to assimilate into American society.  I've written about this many times before, but one little fact deserves special attention.  Catholic Charities received millions in Federal grants to "assist in refuge resettlement".  The Maryland bishops most likely have some financial skin in facilitating the crime of illegal immigration.  I link now to a post in which Michael Hichborn deals with systemic corruption at the USCCB - much of it swirling around immigration.

For those of you who think that Trump's orders are "mean-spirited", bear in mind that illegal immigrants are by definition criminals.  More than a few of them are guilty of other heinous crimes as well, as detailed here.  There are other examples that I may dig out later.  Suffice it to say that this MCC flyer may not be what it purports to be.
Posted by Restore-DC-Catholicism at 11:28 PM