Breakdancing Priests - Why Celebrity Priesthood Is An Oxymoron

A Catholic youth conference at Steubenville University concluded recently.  I'm not certain of the timing, only that it was a fairly major event.  Someone who attended posted video to her twitter account regarding one of the concerts that occurred.  It featured two priests breakdancing.  Here it is.


priests are boring & teens aren't invested in their faith, said no one who has ever been to a Saturday night at @go2steubenville #SteubieOTL pic.twitter.com/9wq03CYuGZ
— KatiePrejean McGrady (@KatiePrejean) July 23, 2017


Some good people objected to these priests carrying on in this fashion.  There has also been some discussion of this matter on facebook.  Many of the comments there betray a lack of appreciation for the dignity of the priesthood - and these come from faithful Catholics no doubt.  I'll post some of them below so you can get a flavor of them.  Below that I'll post some of the twitter conversation.

A little update - Since I started this post, I issued a few reply tweets to that video.  That apparently was enough for Katie Prejean McGrady (original tweeter) to block me from her twitter page.  Therefore I can only see it from here.

In looking back to see what I wrote on these matters at other times, I was reminded of this post that I wrote two months ago.  That is a post in which I address the lack of esteem that even good Catholics seem to have for dignified adulthood and the futility of emotion-based evangelism.  Many of them really do believe that young people won't pay attention to the truth unless priests disregard their own sacerdotal orders.  I'm also linking to another post that I wrote: while that post's topic isn't really germane to the topic of this post, the second paragraph has an analogy regarding "spiritual poison".  I've no doubt that many good things do occur at that conference.  However, this video teaches young people, and all ages for that matter, that emotions and "feelings" should take precedence over intellect, reason and will.  After the jump break I'll put up some of the facebook comments and why I believe they are emblematic of the mindsets that see such juvenile behavior as actually desirable. 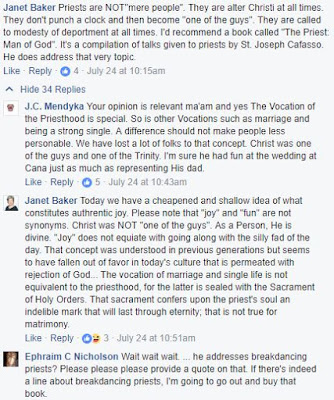 Two common mantras uttered by some of these people are: 1) "priests are only human" and 2) "people need to see that priests/religious are human".

I attempted to answer #1 to the left.  Priests are not "merely human" simply because of the effects of the Sacrament of Holy Orders.  I made that point in the second comment.  Please note the "ridicule" icon at the bottom of that comment.  Someone obviously thought my comment was hilarious.  I'm at a loss to divine how I erred.  Could it be that the person simply didn't want to consider my remarks and thus defended him/herself by dismissing them outright?

What I didn't address at that time was #2.  Why do people need to see that "priests are human"?  What else would priests be?  Also doesn't that statement imply that priests should conform to a disordered perception of what it is to be human?  If they have to prove humanity to a given group, aren't they constrained to conform to false and worldly standards of what constitutes humanity?  Is there anything inherently human in a priest swirling his hips like Elvis Presley on stage and then spinning on his curled spine on the floor? 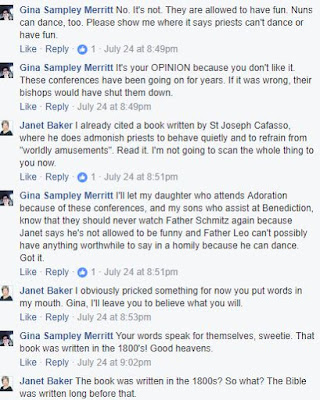 Here's another telling discussion.  Again the book to which I referred was "The Priest: A Man Of God" by St. Joseph Cafasso.  The woman doesn't seem to think it relevant because it's 300 years old.  Well, Scripture and Sacred Tradition are much older.  Age doesn't matter because God's word is timeless as He is. 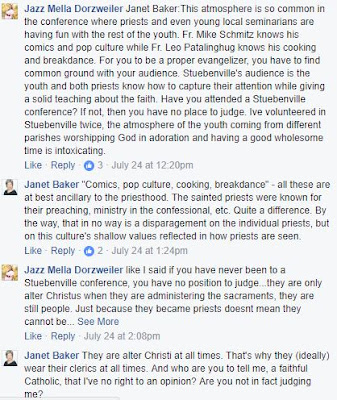 Here we see some incorrect concepts of evangelism.  Regrettably that is how people were taught.  This woman says that in order to evangelize properly, one must find common ground with the audience.  Well, doesn't that depend on the nature of the "ground" in question?  One of the priests is Father Leo Patalinghug, and I believe he is the one who was to the left of the video.  That dance he did, particularly at the start, was reminiscent of Elvis Presley.  In the 1950s, Presley was censored from some venues for swiveling his hips in sexually suggestive manners.  I regret that Father did the same thing.  I've no doubt he meant to imitate Presley in that manner, but that is precisely in fact what he did - same goes for the other priest.  That kind of "common ground" is no foundation for evangelism, and is in fact the antithesis of the true Gospel message.

On that Twitter page there was quite a debate about the merits and demerits about that performance.  Frankly, I was appalled at the snark that Father Patalinghug hurled at some of the others.  See for yourselves. 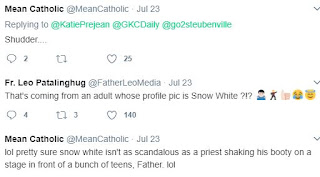 I for one fail to see what a profile picture has to do with the merits of one's remarks.  Father seems to think it does, or is just using that as an excuse to dismiss her comments.  She's right.  Both of these priests displayed very unpriestly behavior in front of kids.  Father Patalinghug in particular carried on in a way that would make Elvis Presley look tame in comparison. 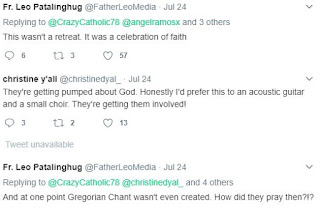 In this series of comments they are replying to someone whose comment I can no longer see because I've been blocked.  Note Father's snarky comment about Gregorian chant.  Go back to his previous comment and ask how Catholics ever "celebrated the faith" without breakdance.  That was no celebration of faith, for an authentic celebration would be focused on Jesus Christ and nothing else.

Mr. Titus is quite correct.  The focus at that event was on the musicians and priests, by design.  And what did Father mean by referring to Jesus as "entertaining" or "boring"?  Such descriptors of God are silly almost to the point of blasphemy.

Then McGrady (tweeter) said this in reply to those of us who objected.  If ever there was testament to the brain damage caused by celebrity-priest adulation, it's her call for yet another mega-bucks hootenanny such as the debacle endured several weeks ago. 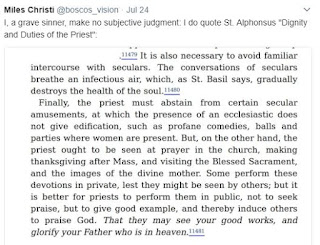 In one of the Facebook comments I made mention of a book written by St. Joseph Cafasso called "The Priest: Man of God".  Here is a quote from St Alphonsus Ligouri regarding "Dignities and Duties of the Priest.  Now I'll link to the story of a priest who understands his real sacerdotal dignity.  Nowhere do you see any evidence of silly, shallow ideas of what constitutes Christian joy.  He is thinking of nothing else but Jesus Christ.  This is the kind of authentic priestly dignity that will attract converts and vocations.

These were all that I could save before I was blocked by Katie Prejean McGrady.

This happened within minutes of me leaving some replies to other comments on this post.  It's clearly within her right to do so, but it certainly shows that she doesn't tolerate debate that well.  I'd not be surprised to learn that my comments are no longer on that page.

Several of the twitter comments contained the following video from Sensus Fidelium on modesty.  Here it is.  Despite the picture making it look like it has been removed, the video will play if you just click on it.

Posted by Restore-DC-Catholicism at 8:27 AM