The Scourge Of Silliness From Our Religious

When I wrote this post about the priests break-dancing for the sake of spectacle, I posted it to Twitter.  Since Father Patalinghug hurled flippant snark at some who voiced concerns for the dignity of the priesthood, I suspected that I too might have some flung in my direction.  Sure enough, here it is.

I have no idea what "drop the rocks" means.  Would someone enlighten me and tell me if that is language typically used by priests?

Most people I know don't make a habit of swiveling their hips.  I certainly don't.  I think our hips function adequately.  Why would we need to swivel our hips to ascertain that?

Quite frankly, the jocularity and mockery that Father is dishing out to us smacks of incredible hubris.  I understand that he is popular and pray that he snaps out of it on his own accord.  Else he might find himself brought crashing down owing to his celebrity going to his head.  If that happens to him, he wouldn't be the first one.  I understand that otherwise his ministry is orthodox and would hate to see another good priest trip himself up.

In another incident, a fully-habited sister, during a fund-raising event, got into a dunking booth.  She too made light of her consecrated state.  While the fund-raising might have been a noble goal, we know the ends don't justify the means.  Below are some comments, and I think some of them hit the nail on the head. 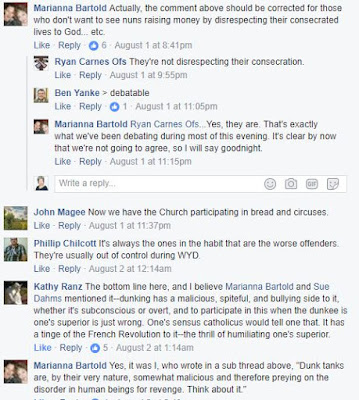 Note how Mr. Magee states that the Church is participating in "bread and circus".  He's quite right.  Never before in the Church's history has any religious ever made a joke of their vowed states.  They may not take themselves seriously, but they MUST take seriously their states as consecrated religious.
Note what Ms. Ranz says about the elements of malice and bullying (even if subconscious) and of humiliating one's superior, or one whose state in religion is more solemn than a lay person's.  Think about it; why else would the sight of dancing/rocking/goofy priests or religious be more enthralling than if the performer were a lay person? 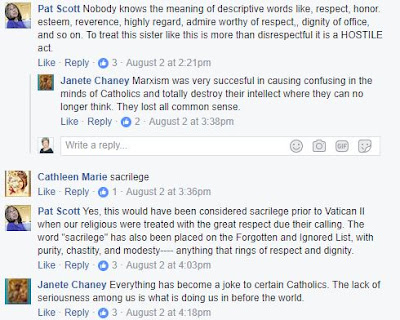 These commenters are rightly lamenting how the concepts of reverence, dignity, etc have fallen off the radars of too many Catholics.  Not only are they not valued, they aren't even considered  at all.  You might recall from the earlier post how one person scoffed at the mention of St. Joseph Cafasso's book, as though the concepts of dignity, reserve, reverence were somehow obsolete.  That is how silly and shallow our youth-worship culture is, and that malady has infected the minds of even sincere Catholics.

I'm going to continue to call out the perpetrators and rebuke them.  How can we ask others to take the Church, and Our Lord, seriously when too many Catholics consider our traditions as fodder for infantile silliness?
Posted by Restore-DC-Catholicism at 7:48 PM