The Public Rosaries This Past Weekend 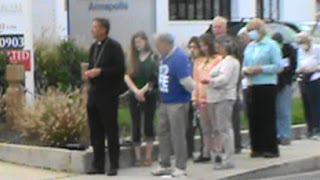 On October 3, I mentioned Rosaries that would be prayed publicly as parts of intercessory efforts to beg God's mercy on the United States.  I attended both and took pictures and videos.  One happened on Saturday, spearheaded by America Needs Fatima.  At noon, approximately 30 pro-life people gathered in Annapolis, very close to the State House.  We then proceeded to the Planned Parenthood abortuary that is in the business area of Annapolis.  Bishop Coffey led the Rosary there. 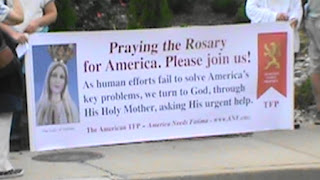 The following day, several hundred pro-life Catholics (and others) converged on Washington DC.  They processed from St Peter's on C Street to the west of the Capitol building.  I was late so my video starts as I was approaching the procession.
The video of that is below.  I regret its shakiness, as I was walking along and trying to keep the camcorder focused while holding my umbrella.  However, I think the proceedings of the video are self-explanatory.  We had a great line-up of speakers, but most of all we had Benediction and prayed in obedience to Our Lady of Fatima.
On social media I've seen other pictures and videos of similar rallies from across the nation.  Let this inspire us all to pray the Rosary daily and honor the requests of Our Lady of Fatima.
Posted by Restore-DC-Catholicism at 7:57 PM