It is no secret to any Catholic with at least one functioning eyeball that young Catholics are rediscovering traditional Catholicism, the patrimony that the now-aging hippies tried to trash.  Funny thing, though.  When something truly is of Divine origin, it simply won't stay under wrap. 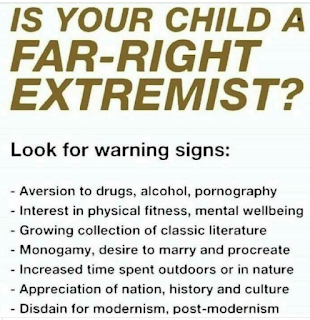 A few weeks ago we saw Father Reese of Jesuit magazine wail and gnash his teeth.  He actually had the hubris to declare that "children and young people should not be allowed to attend such Masses".  Rather imperious and arrogant, don't you think?  I attend a traditional Mass myself and I rejoice at the number of young families (with several children each) in attendance.

Father Reese is not alone in bewailing the demise of the clown-rock-hippy-clappy masses.  A few days ago, we saw in US Catholic an article entitled "Parish Differences Pont To Divisions In The Church" by Peter Feuerherd.  I wonder if he is related to the late Joseph Feuerherd of the Not-At-All Catholic Reporter?  That certainly would explain some of his progressive bent.  Anyway, the thrust of his screed is that the mean old rad-trads (never mind that many of them are young people) are making others feel bad and driving them away from the Church.  Truth be told, those others probably never had actual faith in Our Lord and love for His Church, for if they did, the presence of differing people would never cause them to leave.  We didn't leave the Church when the hippy Jesuits were in ascendency.  I think they are looking for an excuse to undermine those who are living the true faith and to excuse their own disdain for the Mass.

Speaking of Not-At-All Catholic Reporter, we have Michael Sean Winters chiming in with his "Catholics Behaving Badly" nonsense.  In this installment he belittles Father David Nix, Bishop Thomas Paprocki, Michael Warsaw, and Sohrab Ahmari.  My!  It gives us bloggers something to which to aspire - to be listed by Winters as "Catholics behaving badly"!

As the liberal hysteria grows, I'm sure we can expect more snit-fits to be published.

Posted by Restore-DC-Catholicism at 11:21 AM