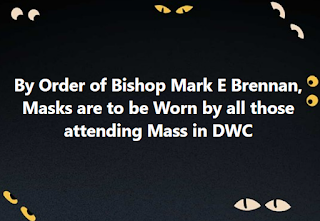 Earlier today on Facebook I saw this meme.  For many reasons, besides the cheesy eye balls all over it, it didn't pass the smell test.  Neither Maryland nor West Virginia are under state-wide mask mandates.  The Diocese of Wheeling-Charleston is a suffragan of the Archdiocese of Baltimore.  That archdiocese does not mandate masks (except Baltimore City where the mayor has mandated masks) nor do the other suffragan dioceses mandate it.  There is no mention of a mandate on the website of the Diocese of Wheeling -Charleston.  I did, however, see this on the diocese's facebook page.  This letter dated August 17th from Bishop Brennan states that the imposition of mask mandates is at the discretion of the individual pastors.  Unless there is a subsequent directive from Bishop Brennan of which I'm not aware, the meme above is a lie.

I'm posting this because I think some of us, being somewhat jaded by our bishops, are allowing ourselves to jump to conclusions without doing our own "due diligence".  It seems that some parishes are mandating masks again, but nothing can stop their parishioners from attending a neighboring parish - and taking their donations there.

NOTE - I am told that there is an update that would render the meme true.  As of yet, I cannot verify that.

UPDATE - When I wrote the sentence above, I saw no documentation that contradicted Brennan's Aug 19th post.  Sadly but not surprisingly, there is such an update now.  Brennan is indeed mandating masks even though there is no legal requirement to do so and the Archdiocese of Baltimore is not mandating masks.  Why in bloody blue hades he is doing that injustice to his flock, with no external pressure, is beyond reason, common sense, and decency.  Someone quipped on the post whether or not the collection baskets would be masked; I would suggest keeping them empty and/or finding another Mass in a neighboring diocese.

While I don't know if the meme had verifiable basis at the time of its creation, it does now.

Posted by Restore-DC-Catholicism at 9:06 PM