When Catholics And Other Christians Mock Holy Things

No, I'm not talking of the usual suspects, those progressives who have made a habit of openly defying Our Lord's teachings throughout the years.  I am speaking of those who have earned some respect for being faithful, but who have recently displayed abysmal lack of judgment.

Two such examples happened this past week, both on Facebook.  Two persons/entities posted memes that I might have expected from those who openly disparage Christian faith and morality.  I post the memes below.

Let me point out a few things, though.  First, these people themselves, by posting on social media, have made their identities known.  I therefore have included their names on the original postings.  Anyone who makes public statements should be prepared for public commentary and even criticism.  Second, I voice some regret for these memes, for they are offensive.  But light must shine on the rot so we can see with what we are dealing.  Here they are. 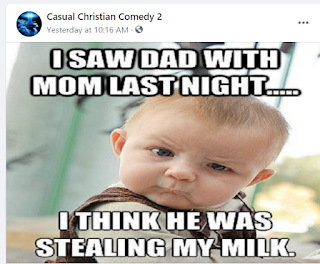 I believe the one to the right comes from a Christian group that isn't primarily Catholic.  Still, these Christians are holding the marital act to be fodder for (at best) adolescent jokes.  I objected to the lack of taste and reverence behind this meme.  Fortunately I was not alone in voicing my displeasure, but the majority of commenters mocked our concerns.
More than a few tried to justify this by citing Song of Songs.  I asked them where in that book was the marital act treated as fodder for locker-room sniggering.  I've yet to receive a reply.  Many told us to shut up and "scroll by". 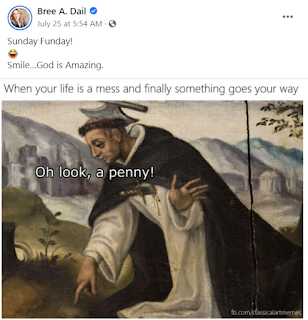 A bit of background information is needed here.  This is a picture of the killing of St Peter of Verona, also known as St Peter Martyr.  He met his death by having the axe put into his head.  As he knelt down, he wrote the Creed with his blood before he was finally stabbed to death.  I'm sure most decent people would hold that the image of a saint's martyrdom is not to be mocked and in fact constitutes sacrilege.
Bree Dail is the Rome correspondent for the Epoch Times.  She herself is Catholic.  Against the objections of others (myself included) she defended her posting of this mocking image.  Again, we heard the calls to shut up and "scroll by".
Several astute individuals, on both posts, reminded us that we are to be in the world, but not of it.  They are correct.  They quoted some pertinent Scripture passages:
I've written quite a bit of these matters, where Catholics and others are losing sight of the fact that our lives here are meant for specific purposes, not for "lightening up".  The Baltimore Catechism stated it quite succinctly: "Why did God make me?  God made me to know, love and serve Him in this world, and be happy forever with Him in the next".  Now I don't often quote Protestants, but it seems that Protestants of yesteryear had more sense of Christianity than do many Catholics today.  Martin Lloyd-Jones stated once that "life is a solemn affair, for the choices we make in this life will determine where we spend eternity."
How on earth can we point the way to Our Lord and His righteousness if we ourselves are giggling and snickering at what God has called holy?
Posted by Restore-DC-Catholicism at 6:15 PM