LCWR Dissidents Gallavant Across The Country!

My friends and colleagues, Mary Ann Kreitzer and Stephanie Block, have written a bit about the LCWR's leadership's latest stunt: traipsing across the country on a "Nuns on a bus" tour, ostensibly to fight against poverty, for social justice and so on.  By the way - note Ms Kreitzer's point about that rather luxurious bus on which these "poverty-warriors" ride.  Wouldn't you love to know who's bank-rolling that thing?  I sure would!

Mary E. Hunt, a local feminist dissident (more on her later) wrote a piece called "We Are All Nuns".  Of course she voices full support of the LCWR - and in doing so, ememplifies very well (albeit unwittingly) just why the Vatican had no choice but to take corrective measures.  In her piece, she states quite plainly her regret that Obamacare didn't support baby-murder enough to satisfy her progressive (and rather blood-thirsty) proclivities, to wit: "More progressive feminist Catholics, myself included, rued the fact that the plan did not cover the full spectrum of reproductive health care—including abortion."  A few paragraphs down, she remarks rather humorously that someone asked her "What Bible do they read?"  "They" refers to the Magisterium.  Well, Ms. Hunt, it's quite apparent that the Magisterium reads the correct authentic Bible while you obviously read a cheap parody of the same!


Ms. Block's article features a footnote linking to the St Benedict Guild (another saint's name bastardized) that now sells shirts and tote bags with the "we are all nuns" theme.  Read through that litany very carefully and notice how they camouflage their progressivism with all sorts of "charitable" sounding slogans.   Peppered throughout the "orphanages", "abused children", "feed the hungry", you see the real agenda: planned parenthood, freedom of choice, same-sex marriage, ordination of women.  If nothing else, this shirt is prima facie evidence of their stratagems since the 1960s. 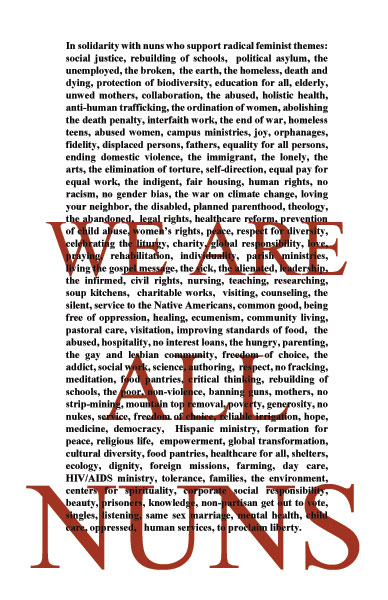 Now back to Mary E. Hunt herself - and why she completely lacks credibility when she speaks of things Catholic.  She is co-founder of something called "Women's Alliance for Theology, Ethics and Ritual" - WATER, for short.  They are headquartered in Silver Spring MD - a few blocks from the Planned Parenthood at which many of us offer Christian witness.  I've long held that Montgomery County MD is basically a liberal loony-bin, and the discovery of WATER's existence strengthens my impression.  As you look on the links you'll see many dissident organizations, including Religious Coalition for Reproductive Choice.  Look at her biography and that of the other co-founder, Diane Neu.  Notice how "Jesuit" and "Berkeley" are sprinkled throughout.  You'll also notice that Hunt and Neu are embroiled in a lesbian relationship - a situation inherently mortally sinful.  No Catholic credibility do they have whatsoever.

Pray for Hunt, Neu and their LCWR cronies.  It appears that they're all on a bus that's headed to warm subterranean places.  Pray that they get off that "bus" and into confessionals before that bus arrives at its final station.
Posted by Restore-DC-Catholicism at 11:25 PM