The Picket Of Shriver's Appearance At Blessed Sacrament Today 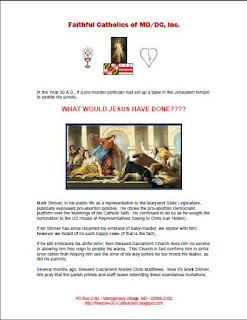 Alright, I'll say this up front.  There were only two of us protesting today's scandal at Blessed Sacrament in DC's Chevy Chase neighborhood.  However, isn't it usually the case that the number of demonstrators protesting a given debacle is less than the number of attendees at said debacle?  Well, I understand that today there wasn't that much difference!

The two of us stayed on the corner of Western Avenue and Quesada St.  We had signs along Quesada and we passed out the flyer that you see to the right.  It was about noon when a man came from the event to report what happened.  He said that there were only 8-10 people up there and that he and his family went there to question Shriver on his pro-abortion proclivities.  He also mentioned that the three parish priests were in attendance, as well as the parish librarian who invited Shriver.  She is the one who had invited Chris Matthews a few months ago - causing us to conclude that some more pastoral oversight might be in order with regards to the guests that she invites.

I didn't think to ask if that "8-10" person figure included his family and/or the parish staff.  For the sake of present discussion, let's suppose that the 8-10 people were folks in addition to his family and parish staff.  That still means that at the maximum, only 18 pairs of ears were listening to whatever Mark Shriver was saying.  I hope that his book sales were equally paltry.

The man's relatives soon emerged.  His sister reported that she asked Shriver if he shared his late father's pro-life convictions.  Shriver answered that it was one area in which he did not agree with his father.  He tried to answer that question quickly, but he did reiterate for the record his approval of baby-murder, in front of the pastor and priests who blew off our earlier pleas.

As I said, we distributed flyers - both in person and on cars.  Some people were obviously pro-abortion themselves (presumably including the individual who saw fit to steal one of our signs).  Others were just as appalled as we regarding Shriver's appearance.  One couple remarked that they too had tried to contact the pastor, but to no avail.  Perhaps further feedback from these parishioners will succeed where we failed.

On the flyer, I stated our prayers and hopes that there is never another such ridiculous pandering to pro-aborts as the two incidents we've now had.  Will we have to picket again?  That's entirely up to the Blessed Sacrament staff.
Posted by Restore-DC-Catholicism at 5:15 PM