When waffling/politician bishops stick their noses into issues such as immigration, gun-control, minimum wage, etc they often find themselves in squalid associations with pro-abortion politicians.  Perhaps "find themselves in" is not an accurate phrase.  The phrase "actively seek out" probably describes their mindsets much more accurately - particularly if they hanker after the perks that come with rubbing elbows with the worldly rich and powerful who flout God's laws. 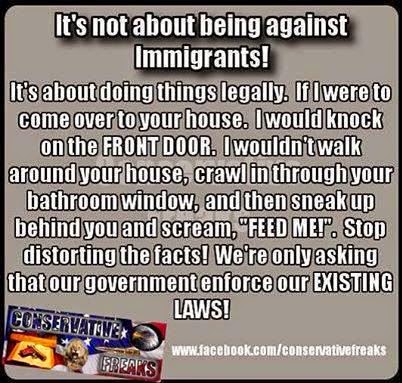 Such was the case last Friday with Cardinal Dolan, as he teamed up with rabidly pro-abortion and pro-sodomite Chuck Schumer to shill for amnesty for illegal immigrants.  Ignore the obviously left-wing bias of the Irish Central as you read the account of their joint photo-op at the Statue of Liberty.  Notice one key concept in one statement of Cardinal Dolan's; it's a concept that seems to have gone over his head.  Here's the statement.  "I would not be here if my great-grandfather Patrick Dolan was turned away in 1852.
I'm a pastor and every great religion welcomes the immigrant. It is fundamental and moral.."

Like Cardinal Dolan, I am primarily of Irish descent.  I would imagine his great-grandfather arrived here by way of Ellis Island, as did most of my ancestors.  My ancestors arrived at Ellis Island, respecting the laws of their new host nation and quite prepared to comply with immigration policies at that time; I presume that was the case with the Cardinal's great-grandfather.  They did not come skulking across the border for they knew such actions were inherently criminal and immoral.

To the right I have posted a very helpful chart to explain to Dolan and his progressive donors friends just exactly why we oppose amnesty for those here illegally.  I don't think they care; in fact, they do their utmost to obfuscate the issues to make people of common sense out to be hateful xenophobes (as exemplified in the Irish Central article).  More and more people are waking up; see this account of citizens of a southern California town who didn't want their hometown used as a haven for busloads of these people.

There's no doubt in my mind that these progressives simply see illegal aliens as those who will be dependent on them for everything - and who will vote them into power.  Nancy Pelosi has been shilling for amnesty for some time now, although not as fervently as she shilled for Obamacare and unrestrained baby-murder.  Recently Sarah Palin demonstrated her ability to pin Pelosi down, stating that Pelosi is more interested in illegal aliens than in unborn children.

I wonder if the latter statement can be said of Cardinal Dolan and so many of the progressive "social justice" USCCB-types within the Catholic hierarchy?  Given the amount of effort spent on each issue, I'd have to opine "YES".
Posted by Restore-DC-Catholicism at 10:21 PM