Here's the garbage action alert that I received from the Maryland Catholic Conference a few days ago.

Take Action
Instead of going to school, playing with friends, and enjoying time with family, tens of thousands of children from Central America flee their homes embarking on a dangerous trek north to the United States.  At the same time, nearly 40,000 young mothers with children have also entered the U.S. and are being placed in detention centers.
Many unaccompanied youth suffer a lack of educational and economic opportunities, and ultimately flee due to violence from organized criminal networks in their countries, which has increasingly stained and strained the fabric of their societies.  The breakdown of the family unit, caused by the absence of physical and economic security, has also caused children to find safe haven with family members in the United States.

Please raise your voice with this action alert to help protect these vulnerable children and mothers by contacting your U.S. senators and representative. For some background on the issue, read the U.S. Conference of Catholic Bishop's  testimony before Congress.

My blogging colleague A Washington DC Catholic must be on the same list.  Read the commentary on his piece.  These progressives do like to omit that teensy detail about the flagrant violation of our borders.

Naturally this week's Catholic Standard joined in the propaganda campaign.  It featured an article about the opening Mass (celebrated by Cardinal Wuerl) for the (so-called) National Migration Conference.  He made it a point to mention that most of us are descended from immigrants; what he decided to omit was that our immigrant ancestors obeyed the laws of their host country, complying with all requirement for immigrants at the time.  That is a far cry from what is happening now, and to try to draw some parallel between then and now is ridiculous, if not downright dishonest. 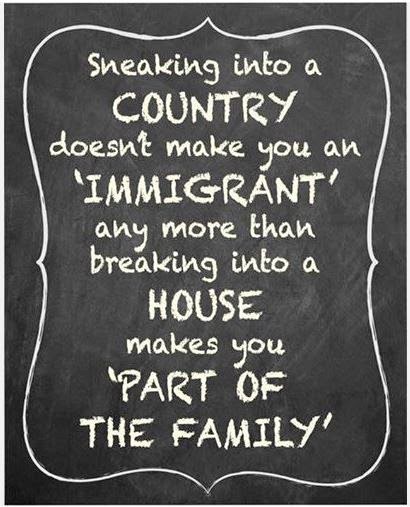 As expected, progressive CINO MD governor Martin O'Malley opined that any deportation of the kids would send them to "certain death"  (like the 90+ that are aborted every day in Maryland, Marty??).  However, several hours later, he told the Obama cartel that it should not send any of these kids to a former Army Reserve Center in Westminster MD.  The citizens in that conservative area of Maryland rallied and (with the assistance of Andy Harris) made plain to the governor that this would not be in the best interests of the citizens and their families.  For once, O'Malley saw the light of day.

That refusal of O'Malley's (a rumored presidential hopeful) must not only have been galling to the Obamanistas, but must have been most embarrassing to the left-wing-leaning Maryland bishops and the Maryland Catholic Conference.  Oh, to have been a fly on the wall at the MCC when they heard that news!  And to think that this kind of common sense was displayed in the liberal loony-bin known as Maryland!  Will miracles ever cease?

By the way - not all of these "kids" are kids.  Many of them are gang members and other adults posing as children.  Do our bishops care, or have all those HHS and DHS grants caused them to turn blind eyes to that fact?
Posted by Restore-DC-Catholicism at 6:37 PM