Two months ago, I put up a post to exhort my fellow bloggers not to throw up their hands in the face of the pandemonium emanating from the Vatican.  Please review it.

I am not the only one to notice the malaise that has recently manifested itself in the Catholic blogging community.  The ones I'll cite below are observations of Catholic British bloggers.  They write on the heels of the de facto quashing of their (and my) fellow blogger who authored "Protect the Pope".  The blogger is a deacon who was stifled by his bishop for standing for Catholic tradition.  As an ordained deacon, he is bound by obedience to his bishop.  Most of us, being lay, are not so constrained - or shackled and gagged as the case may be.

Father Ray Blake of England, four months after the stifling of Protect the Pope, put up a piece asking "Where Have All The Bloggers Gone?"  His concluding sentence troubles me. I quote, "Most Catholics but especially clergy want to be loyal to the Pope in order to maintain the unity of the Church.  Today that loyalty is perhaps best expressed through silence".  William Oddie of CatholicHerald.UK, elaborating on Father Blake's piece, seems to agree with him.  He admits that much of the silence has been caused by the uncertainty from the Vatican and the subsequent discouragement felt by Catholic bloggers.  I encourage you to read both pieces and their accompanying comments.

With the notion that "loyalty is expressed through silence", I take strenuous exception.  Think about it.  What message is communicated when we are encouraged to be silent about the Pope in order to be loyal to him?  That itself is rather uncomplimentary of the pope; silence often communicates its own message rather unmistakably.  Would Father Blake et al ever dream that silence about Pope Benedict XVI and his writings would have been a proper expression of loyalty to him?  If not, what's the difference? 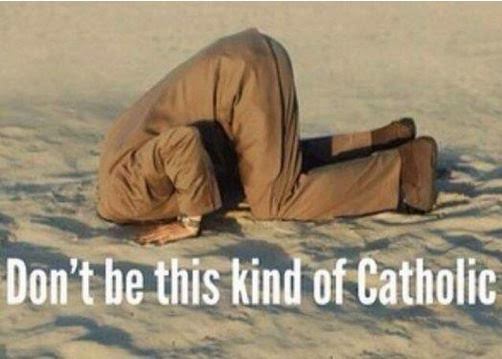 Let me take a minute to explain why I will continue to point out gaffes emanating from papal interviews and the Vatican.  Not every utterance of the Holy Father constitutes Church teaching - certainly not the interviews, off-the-cuff remarks, etc.  There are those Catholics, particularly converts, who might have the idea that everything the Pope says/does is representative of Church teaching.  Now think back to Holy Thursday, when Pope Francis broke Canon law to wash women's feet.  One person was understandably confused.  She reasoned that if Church law could be broken with impunity on Holy Thursday, why should anyone hold Church teaching about contraception in any higher regard?  I came out point blank and stated that the pope is a human being and what he did was a violation of Church law; I don't know his reasons and I don't really care.  He erred.  What else could I tell her?  Anything else - including silence - would have been a blatant lie to her face.  She deserved better than that; she deserved the truth.  I did not make the pope look bad in so doing; he did that by himself.  Later I will post on the ridiculous notion of the Pope going to preach at an evangelical church - with no intention of preaching the fullness of truth to them.  Don't they deserve better than that?  My fellow bloggers, if you come across a fellow Catholic with similar questions looking for answers, will you wallow in your on dejection and just shrug your shoulders and walk away in silence from that hurting person?

Another blogger named Mundabor proposes that "Now, More Than Ever, It Is The Right Time To Blog".  He's right.  This is no time to surrender to despondency, discouragement and even cynicism.  Too many bloggers have been doing precisely that, I regret to say.  Just during the past few weeks I pulled from my blog roll (right side bar) two Catholic blogs that had been essentially abandoned by their owners (one for over a year); will I have to purge more?

Fellow Catholic Bloggers!  This is no time to go wimpy-wobbly against our blogging apostolates!   I think I remember one of the comments on the other two blogs, written by a Catholic blogger.  He/she wrote that they didn't blog because their heart wasn't in it after the election of Francis.  To that I reply, "So what?  Blog and speak anyway!  You don't feel like it?  What difference does that make?  Shake off your doldrums and start hitting your keyboards again - now!"
Posted by Restore-DC-Catholicism at 9:09 PM