The December 17th issue of the Catholic Standard arrived in my mailbox today.  As all know, it is the official news organ of the Archdiocese of Washington, supposedly a bastion of all things Catholic.  At the very least, one would hope that everything published therein would reflect Catholic morality.  Today that assumption is called into question.

Please notice the two pictures of page 19, the advertisement page.  I'm unable to find the online version of it so I presume it doesn't exist. 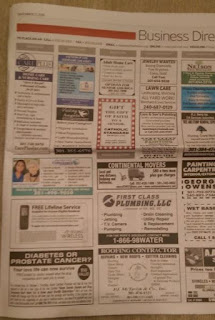 Here is a shot of the entire page 19.  The ad in question is at the bottom left.  The next shot is a close-up of it. 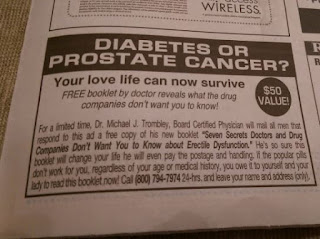 Here it is.  Regrettably we've all seen these as spam ads in our email boxes.  Fortunately many of us have learned to filter these out with various firewalls and spam filters.  So now we find them in Catholic newspapers?  Who at the Standard is in charge of deciding what ads are permitted to be published?

Ladies and gentlemen, this is NOT the sort of ad that belongs in a Catholic publication, especially the official publication of a Catholic diocese.  Look at the wording of this thing.  "Love life"?  Right there we see the word "love" being cheapened as it is equated with sexual activity.  I shudder to think what these "seven secrets" might entail.  We hope and pray that none of these "secrets" has nothing to do with mortal sins against chastity.

The ad claims that "you owe it to yourself and to your lady".  Lady??  That's rather all-encompassing, wouldn't you say?  Could they not at least have used the word "wife" instead of "lady"?  After all, such matters should be occurring only between a man and a woman united in permanent, faithful matrimony.  It would seem that "lady" leaves the door wide open for fornication and/or adultery.

Some people at the Standard need to be set straight for allowing this debauched ad to be published.
Posted by Restore-DC-Catholicism at 8:47 PM