Some Interesting Tidbits Regarding The UN Climate Summit In Paris

Yep!  This is the same one that the pope praised during his screed interview on the plane a few days ago.  Remember?  He said the summit was "humanity's last chance" because the world is "at the limits of suicide".  Well, let's see what happened?

Bear in mind it was so important the Messiah Most Miserable was there.  He talked.  And talked.  And talked some more.  The speakers were given a 3-minute limit.  Despite several prompts that his time was up, he kept right on bloviating for 14 minutes in total: that is, almost 5 times the allotment.  But...he's Obama, and the rules that bind the rest of us mere mortals don't apply to His Nibs.  Watch it here.  I'm not sure who embarrasses me more: Obama or the pope.

I understand that in the spirit of reducing carbon footprints and all, that the working meals were frugal and simple.  See this as a sterling example of how to live simply.  Neat, huh?  Did you catch the $380/head price tag?  Who paid for that? 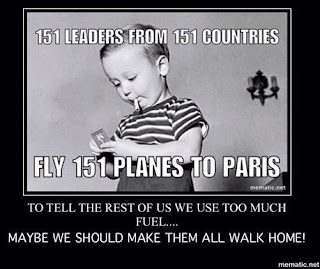 Now I understand that 151 leaders were present at that meeting.  How many of them, in order to reduce their carbon footprints, traveled in less-than-luxurious styles?  The estimate would be very close to zilch-zero-zip-nada.  Obama's round-trip flight itself spewed about 370 tons of carbon into the air - the equivalent of driving 72 cars for one year.  But again, the expectations that are laid upon us poor peons simply don't apply to Obama and cartel.  I wonder how many tons of carbon the entire summit belched into the air?

The whole thing was an abysmal joke.  And yet the pope thinks this was mankind's last hope lest the world commit suicide or something.  Gee whiz!  Did the pope forget about Jesus Christ being the Way, Truth and Life?
Posted by Restore-DC-Catholicism at 11:14 PM