After Christmas Mass we all received a Christmas present.  It was a book by Matthew Kelly called "Rediscover Jesus".  I've written about Kelly in the past as I have found his stuff to be, quite frankly, less than Catholic.  Because it was free (meaning I did not have to pony my cash to Kelly's wallet) I took one and glanced through it.  That one glance told me that Kelly's theology had not improved one iota.  I copied the page and post it below. 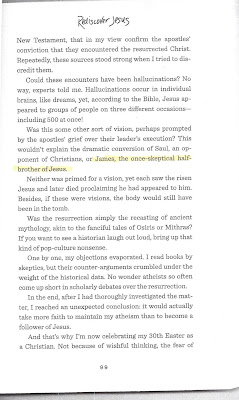 The problem is the last sentence of the third paragraph.  I tried to highlight it, but it is faint.  At any rate, that last sentence is enough to cause a sane Catholic to junk this book.  Ladies and gentlemen, note the phrase "half-brother of Jesus".  Jesus had no "half-siblings".  The Perpetual Virginity of Mary is defined Catholic dogma!  Please let no one delude themselves into thinking that this point is "just a technicality".  If Holy Mother Church thought it important enough to make the perpetual virginity of Mary a dogma, then it deserves all due consideration.

Whether or not Kelly intended it, he wrote heresy.  Perhaps this lapse can be chalked up to faulty formation that he may have received as a child.  We all know how far Catholic education has declined in the past 50 years or so.  But isn't that all the more reason for our parishes and chanceries to carefully vet these books before they're released to the Catholics in the pew?

There are other issues with this book (and his previous books).  While this book does state that sin hinders our relationship with God, it is quite selective about the kinds of sins with which it deals.  I see talk of "greed" and "losing one's temper", but nowhere did I detect any mention of mortal sins such as the support of abortion, contraception, gay #mowwidge.  But anyone with two functioning eyeballs can see that it's rampant in the pews - not only the support but the participation in these mortal sins.  That means we have Catholics in the pews who may well be hell-bound, and there's no mention of these real dangers.  Speaking of hell, I see no mention of that important reality whatsoever in that book (or his other books).  Why not?  Our Lord mentioned it often as a solemn warning.  In all fairness to Kelly, it can be argued that he's merely following the lead of the American clergy in not specifying mortal sins and the reality of hell.  In their misguided and dare I say feckless desire not to upset people, they are doing the Catholic congregation a gross disservice.

Another related issue is the overemphasis on "experience".  As I read the Gospels, I see no mention of Jesus calling people to "experience" Him.  Rather, there is the call for repentance and obedience, with the graces communicated through the Sacraments as administered by the Church.  Indeed, in the Gospel of Mark, Jesus's first recorded word is "repent".  The soon-to-be-canonized Mother Teresa of Calcutta is said to have gone most of her life with no experience of God's presence.  She did count that as a cross, but still it goes to show that "experience" is not a necessary component of the Catholic's spiritual life.  One could call Kelly's approach "putting the cart before the horse", but without specific mention of the serious sins for which one should repent and obtain absolution, I'd have to say in this instance that "there's a cart but no horse".

Some might think my characterization of Kelly's materials as being "poison" to be a bit harsh.  They might say that the great majority (while somewhat vapid for its "peaches and ice cream tone") is decent enough.  But no one can gainsay the heresy that is there in plain sight.  For reasons that I stated in an earlier post, I don't think anything that contains heresy can be used as a spiritual guide regardless of other material contained within.

Is this book showing up in other parishes?

UPDATE - The answer to that last question is "yes".  Someone from St. Andrew the Apostle told me they have it.  That suggests impetus from the DC chancery.

UPDATE #2 - Per Jeff's comment below, the phrase I wrote above, "he wrote heresy" should be rendered "he published heresy".  Kelly says it's from another source but in his own book offered no correction nor clarification regarding the Church dogma.
Posted by Restore-DC-Catholicism at 11:26 AM