San Bernardino Shootings: Will The Vatican Finally Wake Up?

First, I extend my prayers to the victims of yesterday's mass shootings in San Bernardino yesterday. Regrettably, there are those who would accuse me of "microagression" by the mere suggestion of prayers for others: more on that in a moment.

When I heard the accounts of how the assailants did their deed, it seemed quite obvious to me that this was a jihadist action, fueled by Islam.  Some had bandied about the idea of someone getting their nose knocked out of joint at the conference and then shooting up the place.  Common sense would have shown that to be impossible.  The shooters were clad in body armor.  They had multiple weapons on them, including explosive devices.  They carried out the shootings in a manner indicative of some military training.  Their entry and exit to and from the building was obviously well-planned (although their planning for the aftermath seems to have gone awry).

Now we are hearing confirmations that the dead man and woman were husband and wife, and radical jihadists.  They had been in communication with groups that are on the FBI watch list.  As this young lady says on The Blaze, "if it looks like a duck, walks like a duck and quacks like a duck, it IS a duck"!  Isn't it odd that last week so many of the lame-brain-main-stream media, along with their Democrat/progressive employers, were falling all over themselves to portray Richard Dear as "just another pro-life right-wing nut job" with no evidence whatsoever, but in the face of overwhelming evidence, they can't bring themselves to acknowledge yesterday's shooting to be an act of muslim terrorism?  ISIS does - gleefully of course.  In fact, they created a hashtag #America_burning to celebrate the slaughter.  Now see this from Breitbart how this shooting refutes so many progressive talking points. 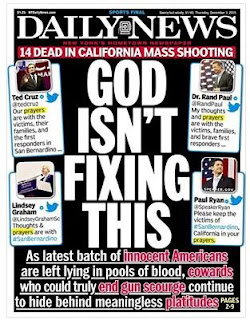 But wait!  It gets even more ridiculous as the progressives scurry for some way to use this tragedy to justify their anti-Christian bigotry.  Take a look at the latest screed plastered all over the front page Of the New York Daily News.  Let me say this right off the bat to the creators of this journalistic pig slop.  There is a reason why God "isn't fixing this".  It's really quite simple and the blame for this lies squarely on the shoulders of those who mock Him and pillory His followers.  For decades now, progressives such as the Daily News leadership have done all they could to expunge Christianity from public life in the United States.  They have banned public prayer from schools and other public gatherings.  They have removed placards with the Ten Commandments from public court houses.  They have crammed sodomy down the throats of those who want to obey God in their commercial affairs.  They have - and are - murdering millions of babies, willed into being by God, via abortion and contraception.  The picture of the Daily News shows not only mockery of those who invoke God, but unbridled hatred of God Himself.  When God is so widely rejected, He will withdraw and let mankind experience the logical consequences of the rejection of His providence - a providence that includes His moral precepts.  This is not rocket science!

We need a real national, world-wide conversion to God and to His Church.  Several days ago, the Pope called for a "revolution of tenderness".  No - a thousand times no!  The last thing the world needs is for Catholic clergy to carry on like a bunch of whiny, metrosexual wussies who yammer on about "tenderness" while the world careens towards hell in a handbasket.  We need our prelates to conduct themselves like real men, such as St. John the Baptist and the Apostles and other martyrs who boldly proclaimed the truth, no matter who got their "poor widdle feel-bads" knocked out of joint.  By the way - if the phrase "revolution of tenderness" sounds sickeningly familiar, it's because that is part of the title of a book written by dissident bishop Cardinal Kasper; see my earlier post for detail on that.

So will the pope continue to rail against "fundamentalist Catholics" (in this video, the pope sounds like he's of the same mind as the Daily News) or will he finally realize he is the Vicar of Christ and get back to the basics of the Catholic faith himself?  Perhaps he'll ditch Kasper, Maradiaga, Wuerl and listen to prelates like:

Let us pray (despite what the Daily News says).
Posted by Restore-DC-Catholicism at 10:04 PM