Did The Pope Just Answer the Dubia In The Worst Way Possible?

As way of review, I link to my post in which I published the original letter of the four Cardinals.  In that letter are the five dubia as they were formally promulgated.

In September of 2016, the pope wrote a letter to some Argentinian bishops in which he said that "in some cases", divorced and civilly remarried Catholics (that is, Catholics living in the mortal sin of adultery) could receive Holy Communion.  Furthermore, that letter stated that there was "no other interpretation" of Amoralis Lamentia possible. 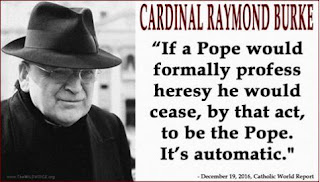 Comes now the news that the pope has declared that this letter that he wrote to the Argentinian bishops is "authentic Magisterium".  That is, he has attempted to change the teaching of the Catholic Church that she received from Jesus Christ Himself centuries ago.  See here for another analysis.

Does the meme to the right depict the current state of affairs of the Church?  Does this new "magisterium" rise to the level of formal heresy?  If not, why?  If so, it would seem that we may not have a pope, save the Pope Emeritus.

At any rate, it would appear that the pope has indeed answered the first of the five dubia incorrectly.  Now will Cardinals Brandmuller and Burke issue the formal correction immediately?  How much more damage must ensue before that happens?

Posted by Restore-DC-Catholicism at 12:41 AM