Yes, that's right.  Pope Francis wants to rewrite the Lord's Prayer, also known as the Our Father.  He thinks the translation of "lead us not into temptation" is poor.  My first thought when I read that was, "if it was a poor translation, how is it that in 2000 years of Church history, no theologian or bishop or pope ever noticed this problem?"  Well, maybe it's because the problem doesn't really exist. 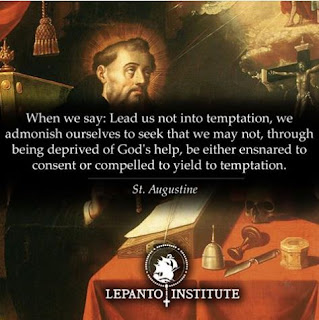 The Remnant correctly points out that the English and Italian translations are taken straight from the Latin Vulgate, and thus the pope's problem is with the prayer as composed by Our Lord Himself.  So he thinks he knows better than Our Lord how His prayer should read?  If the pope changes His very words, then anything can be changed - and maybe that's an ulterior motive.  Maybe that's part of the systematic process of the deconstruction of Faith and Tradition.

But, hey!  We can't be - oh, what does the pope call us? - "rigid Christians", etc.  Perhaps the pope needs help in making the Lord's Prayer more, shall we say, relevant!  Louie Verrecchio has a great suggestion; I'm sure he put hours of prayer into it! :-D  And how about this priceless gem?

Ridiculous, you say?  Not anymore ridiculous than the pope's attempt to mangle the Our Father.
Posted by Restore-DC-Catholicism at 11:19 PM