That means neither can we.  In wars in the material world, there can be things like Christmas truces, but not in spiritual warfare.  Satan doesn't honor truces and it is naive to think that we can presume upon one.  I regret that I have some "cases in point". 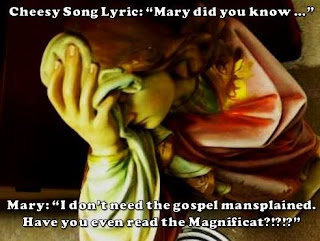 The first one involves the ubiquitous and heretical "Mary Did You Know".  A friend of mine via facebook was subjected to that at Mass this morning of Christmas Eve.  It happened at the 10am Mass at St. Matthew's in Wausau, Wisconsin.  I looked at the parish website and it certainly appears to be a solid parish.  Why not drop Father a line to advise him of the problems with that song?  Chances are he did not know of the music line-up in advance.

The second error of which I learned today is quite a bit more inexcusable.  It appears on a site called Aleteia; once that site was fairly reliable as a source of Catholic information but lately they have tarnished their own credibility as you'll see in this article.  Loosely based on the Fifth Joyful Mystery of the Rosary, it is called "Jesus The Tween In The Temple".  It is both banal and blasphemous.  Yes I said blasphemous.  What else does one make of this statement: "But then the boy adds a coy guilt-inducing condescending jab to the spiritual solar plexus. 'Didn’t you know I must be in my Father’s house?'"  Our Lord would engage in coy behavior to His own parents?  Mr. Saltzman really should hightail it to a confessional.

We were also insulted with this.  Now Save The Storks is a pro-life organization; they do great work.  They may well be Protestant.  However we cannot remain silent in the face of a direct slap at our Blessed Mother and her Immaculate Conception.  Fortunately many Catholics are speaking out.

Fellow Catholics, please have a blessed Christmas.  And stay vigilant.
Posted by Restore-DC-Catholicism at 11:21 PM

Email ThisBlogThis!Share to TwitterShare to FacebookShare to Pinterest
Labels: Advent, Christmas, Immaculate Conception, Mary Did You Know, Protestantism, save the storks