Common Ground With Pro-Abortion Supporters Is A Deadly Myth

I wrote several times in the past about the futility of seeking "common ground" with pro-abortion people and/or those who vote for pro-abortion politicians.  After a rather startling and distasteful exchange I had with someone (a former pro-life leader) on facebook a few days ago, I must now conclude that any attempt to seek such "common ground" will be fraught with great spiritual and intellectual peril.

The background is this.  A friend who is caring for a disabled relative complained of treatment that she received when she went about in public without a mask.  I will call her "Mary".  The former pro-life leader, whom I will call "Bill", lashed out at her with over-the-top venom and vitriol.  He accused Mary of "attacking her relative", about to "have his blood on her hands", etc.  I and a number of others took him to task.  Mary pulled down his remarks; I don't blame her a bit.  I remain flummoxed at the vehemence with which he addressed Mary simply because she didn't go along with being treated like a sheep. 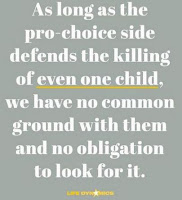 As mentioned earlier, Bill was a pro-life leader several years ago.  He's since embraced some liberal causes and has voiced disappointment that other pro-life people, particularly those of us who remained on the front lines of activism, didn't follow his lead.  He made mention of trying to seek "common ground" with pro-abortion proponents.  A key problem with that ill-advised attempt is that it lends moral legitimacy to the pro-abortion position, a legitimacy that is completely erroneous in every way, rendering that attempt immoral on its face.  Moreover, I have seen other pro-life people, similarly deluded, befuddled in their thinking to such great extents that they now embrace inherently immoral positions.

Here is a perfect "case-in-point" to illustrate that danger.  There is an outfit called "Catholic Common Ground Initiative".  That link is to its website.  When I visit sites like this, I always examine its leadership and the people with whom they collaborate and/or honor.  Right away you'll notice that this cabal is the brainchild of Cardinal Bernardin.  Other notables who pollute(d) its leadership include Cardinals Gregory, Mahoney and Tobin, and honorees such as John Carr, Carolyn Woo, etc.  You get the picture.  You take up with dogs, you take up their manners.

The meme in this post is absolutely true.  That can be hard to acknowledge when the pro-abortion mentality is found amongst one's relatives and friends, but the truth must be faced.  We must treat them with respect and dignity, of course, but realize that they have embraced objective evil.  The Spiritual Works of Mercy include "instruct the ignorant" and "rebuke the sinner".  We want to see them attain heaven, and they can do so only by repentance and conversion.  Charity of the "tough love" variety may be in order.

Posted by Restore-DC-Catholicism at 12:03 AM