"If we can accept that the mother can kill even her own child, how can we tell other people not to kill one another?"  That question was asked by Saint Teresa of Calcutta as she spoke at the 1994 National Prayer Breakfast.  Those words have obvious significance today.

At Robb Elementary School in Uvalde Texas, Salvador Ramos entered with firearms and murdered nineteen school children and two teachers.  Many others were wounded as well.  Police dilly-dallied with their response to the shooting (more on that in the next post).  A Border Control agent shot Ramos dead, ending his killing spree.

Facts are emerging about Ramos and his past as I write this.  The progressives have predictably placed all the blame on inanimate firearms and none on Ramos.  They certainly ascribed to themselves no blame for driving God and godliness out of schools, for facilitating the murders of thousands of babies every day via abortion, for the tearing down of the traditional family, etc.

When I say progressives, I also mean the majority of US Catholic bishops.  Earlier this week, these feckless hirelings failed - refused - to stand in solidarity with Archbishop Cordileone as he administered the sorely-needed medicine of church discipline to Nancy Pelosi, a chief cheerleader for baby-killers.  Some did, the majority did not.  By the way - owing to her facilitation of child slaughter and all sorts of homosexual deviancy, bears her share of the Uvalde victims' blood on her hands.  Father Stephen Imbarrato, a priest who has participated in several Red Rose Rescues, issued the following statement, with which I concur. 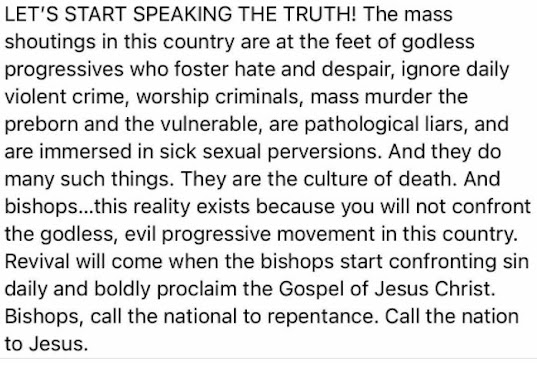 The Jesuit bird-cage liner known as "America" magazine featured a bunch of bishops waxing indignant and mournful about (wait for it!) guns!  Surprise - not!  All of these Jesuit-chosen bishops either want to : get to the "root cause" and/or ban guns altogether.  As for their pursuit of the "root cause", please note that not one of these swishops voiced support for Archbishop Cordileone's actions aimed at curing an actual root cause of the malaise in our culture.  Of particular note is the bloviating of Cardinal Cupich, yammering on and on about guns.  His archdiocese of Chicago has some of the strictest gun laws in the country, yet it is one of the most deadly cities in the US for all its shootings.  I might also point out that one of his noisier priests, Fr Michael Pfleger, called for the owner of a Chicago gun shop to be "snuffed".  Cupich did absolutely nothing in the face of that threat.

This is the main point.  The bishops who refuse to bestir themselves when it comes to the attacks on faith and morality from this secular culture have absolutely no credence whatsoever to pontificate about violence.  In many cases, these same bishops actually stand in the way of good people who are trying to bring some sanity to this culture.  For instance, the same aforementioned Cupich, while bishop of Spokane, refused to let his priests join in the 40 Days for Life campaign.  Bishops here in the State of Maryland have always dragged their feet when it comes to petition drives to fight horrendous abortion and/or gay agenda laws.  In Cardinal Gregory's first "Theology on Tap" talk, he sang the praises of Fortunate Families, a gay-enabling cabal.

It is those clerics, with a few notable exceptions, who have a substantial share of the responsibility for the Uvalde shootings and other acts of violence.  They have failed - refused - to call their congregations and communities to repentance and conversion to the One True Faith.  It is they who refuse to protect the dignity of the Sacraments and the Mass of the Ages.  Instead of solid truth leading to salvation, they preach insipid homilies that are full of happy-clappy, fluffy-puff stuff.  I would ask whether or not they'll ever wake up, but I am becoming more and more convinced that many of them aren't so much weak as they are in actual cahoots with the Soros-led cabal that itches for a godless society.  Therefore I won't ask when they will wake up.  I ask, when will WE wake up??

Posted by Restore-DC-Catholicism at 8:37 PM