Truth Was Spoken To Georgetown University On May 18, 2012


Concerned Catholics and other pro-life Christians went to Georgetown University Friday morning (May 18) to protest the self-defilement committed by Georgetown in allowing Kathleen Sebelius to address their graduates.  Her latest slap in the face to the babies occurred in the form of the HHS mandate that she engineered and that Obama is attempting to cram down our throats.  Even if she hadn't committed that atrocity, her chequered record as governor of Kansas should have been enough to disqualify her as any role model for Catholic youth.  To refresh memories, she was an accomplice to Kansas' late-term abortionist, the late George Tiller.  Just google their two names together and you will see an eyeful.

I'd like to recommend for your reading another first-hand account by Charles, a college student home on summer break who joined us.  See http://modernletters.wordpress.com/2012/05/18/1415/

I've a number of photos and videos to show (all taken by me).  I'll place them after the jump break so..

There were two groupings of us at different locations.  The American Society for Tradition, Family and Property gathered outside the gates at 37th and O Streets.  The rest of us convened at the Leavy Center entrance located at 38th and Reservoir.  I arrived shortly before 10am; some had already been there.  We held signs to explain why Sebelius was an unsuitable choice for a commencement speaker.  For the greater part, the people streaming in ignored us - or pretended to do so.  Not all did.  Watch this snit-fit pitched by this young gal.  (Click here if you can't see embedded video)

Among our number were JoAnn and Steve, who came all the way from Rochester NY to join in this effort.  Here they are, with a most appropriate sign, with a Crucifix on a pole. 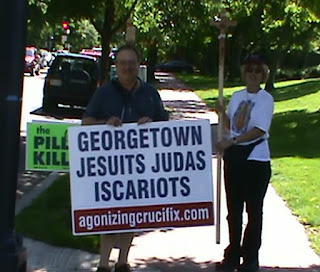 After a few hours there, I went to the other location at 37th and O Streets.  I understand that a short while before that, a protester disrupted the disruption (for that is what So-bilious's appearance was) and was evicted.  The American TFP put on an impressive presence, with their capes, banner and bagpipe players (they didn't play anything while I was there).  They delivered this exhortation to people as they were leaving the ceremony: (click here if you can't see embedded video.)

Along with exhortations, rebukes are necessary.  They certainly were on Friday.  This one was delivered by a man affiliated with Society for Truth and Justice (as TPF was preparing to depart).  Click here if you can't see embedded video.

Posted by Restore-DC-Catholicism at 9:07 PM