Last week's Catholic Standard contained a letter released by Maryland bishops on the crisis brought on. 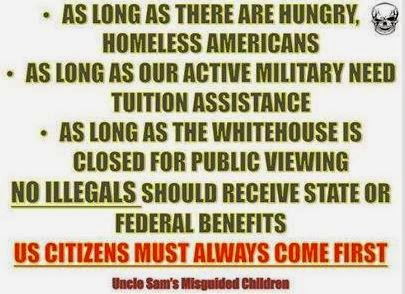 by the increased masses crossing our southern borders.  A few days later the Gazette published an article penned by Blair Lee IV entitled "By Heart or By Head"

Lee raises concerns that citizens of Maryland and of the US at large are raising.  Other concerns involve the real nature of the immigrant population that is now bombarding the borders.  Not all are children; many are gang members posing as children - or in many cases not bothering to disguise themselves.  Oh, technically they may be minors, but many of the 16-year olds are gang members and are actively recruiting for the gangs from fellow immigrants.  Read this account of jihadists and people infected by ebola coming through our all-too-porous southern border.

A good Catholic will consider the plight of these people (assuming they truly are desperate, which many of them really aren't).  However, he/she will prioritize his/her concerns.  The needs of his/her family will come first.  That obligation binds on them by virtue of the Fourth Commandment.  An extension of that will be to place as priority the needs of his/her fellow citizens.  Note: I said "needs", not "preferences".  Regrettably, when we do so, we are judged to be xenophobes, racists and all sorts of unsavory epithets.

It is even more unacceptable when that attitude emanates from our bishops.  Nowhere in that propaganda piece published by the Standard is there any validation of our concerns.  The bishops carry on as though the priorities of good Catholic people were of no account.

Whatever else one might think of the bishops' letter, it is NOT magisterial teaching.  At most, they are delivering their prudential judgment with which we are liberty to disagree.  As you might suspect, I certainly do disagree with it.  Here are some facts to consider as you ponder this question.  I've mentioned before that the bishops may well be complicit in the crime of human trafficking, and they've received some nice-sized federal grants for it.

Lee opines that liberals may be allowing their heart to overrule their heads.  In the bishops' case, I hope that's true, and not that the wallet overrules everything else.
Posted by Restore-DC-Catholicism at 10:46 PM