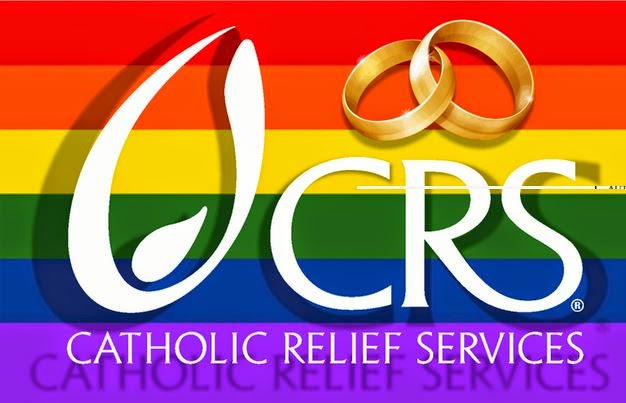 The Lepanto Institute broke the news that the current Vice President of Overseas Finance for Catholic Relief Services, Rick Estridge, entered into a mockery of marriage with his sodomite accomplice, William Goretsas.  Lepanto has a copy of the Maryland marriage license on their page.  The legal travesty happened over two years ago.  Lepanto also has numerous screen shots from Estridge's Facebook and Linkedin profiles that show Estridge to be, well, "out and proud" regarding his promotion of perversion - and his thumbing of nose at Catholic moral teaching.

The Facebook and Linkedin accounts are deactivated as of today.  Presumably that was done in a lame attempt at damage control.  It appears that he hasn't completely cleaned up his Twitter account. (UPDATE!  That's gone, too!)  We see that he is following both Michelle and Barack Obama as well as Ellen Degeneres.

At any rate, given his rather high-profile flaunting of his mortal sin, no reasonable person can gainsay that Estridge's objectively sinful status wasn't known by the higher-ups inside the Catholic Relief Services.  For over two years, Catholic Relief Services - the same that pretends to uphold Catholic moral teachings - has harbored within its ranks of power a known sodomite.  If the CRS directors have allowed this to fester in their midst for over two years, what does that say about their own loyalty to the Catholic Church and to Jesus Christ Himself?

Will John Rivera (or whoever now occupies the none-too-enviable position of CRS Director of Communications) go all-out into damage control mode as he tried to do three years ago (and miserably flopped)?  What will the leadership of CRS do about this highly-placed official who is flouting Church teaching and contributing to the ongoing lie that is its "mission statement"?  I think we all know the answer to that - zilch, zip, nadda!

I think we also have a glimpse regarding the reason why the upcoming March for Marriage on Saturday the 25th has received so little support from the two Maryland archdiocese.  Yes, a few parishes have heroically promoted this march, but they are few and far between.

It is my opinion that the Catholic Relief Services is jaded beyond repair.  In fact, the same can be said for the entire United States Conference of Catholic Bishops.  The whole apparatus needs to be dismantled.  In the meantime, do not drop one red cent into any collection that is held for the benefit of CCHD, CRS, Catholic Charities or anything masterminded by the USCCB.
Posted by Restore-DC-Catholicism at 8:43 PM