First, let me give a little personal background information in the interests of making clear my own first-hand knowledge of what I'm about to relate.


During my late teens and much of my early adulthood I was involved with the "Catholic charismatic renewal" as a member of Mother of God Community.  There were quite a few other groups like it throughout the United States.  Many of these - including MOG - began to behave as cults.  In the mid 1990s, much of that came to a halt.  In 1997 the Washington Post magazine put out two issues that delved into the history.  Normally I don't recommend anything by the Washington Post but I can vouch for the accuracy of this series - based on my own personal knowledge of events.  During 1996 I ended my own official affiliation with MOG for many reasons.  One of those reasons was my apprehension of their overemphasis on personal "experiences of God".  I still count many of the other members of MOG - current and past - as close friends; they are sincere in their love for God and the Church.

The Mother of God headquarters is located right across the street from my parish.  There has been some "give and take" with various events, such as our parish picnic being conducted on MOG grounds.  However, I was a bit alarmed to see the flyer below in our parish bulletin this past Sunday. 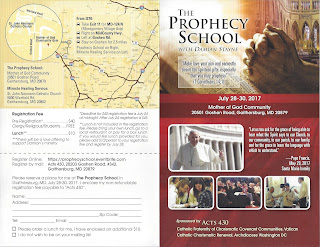 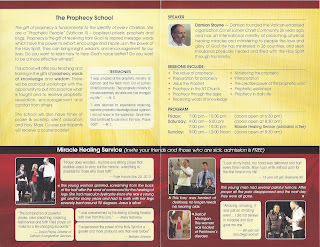 As you can see, it is for something called "The Prophecy School".  Again, a little background is in order.  One basic tenet of the charismatic renewal is that Christians can be "baptized in the spirit" and thus utilize "charismatic gifts" as listed in Corinthians.  A few of these include prophesy, wisdom and knowledge.  Others include the more well-known "tongues", "healing", etc.  The Church has made no official call on the status of these "gifts" but for the sake of this article, let's assume they indeed are valid.  If that is the case, they are from God, dispersed as He deems best.

Now let's address this "prophesy school".  It will be conducted by someone named Damian Stayne.  I googled him and he seems to be a layman who founded and now leads a group similar to MOG.  Nowhere, though, do I see any list of his credentials, the sort that would establish his expertise in regards to prophesy or any of the other things listed in Corinthians.  By "credentials" I mean those recognized by the Catholic Church such as degrees, etc - of an objective nature as opposed to some fuzzy "he's spirit-filled!" pie-in-sky criteria.  He's a layman, just like most of the readers of this post.  I'm assuming that most of the Catholic readers of this post have received the Sacrament of Confirmation and are faithful to prayer, frequent the Sacraments, practice the virtues, imperfect though our efforts may be.  Therefore, I've no reason to believe that Mr. Stayne has anything over any other faithful Catholic.  What he's "teaching" in this "school" is merely his opinions - opinions that are just as valid as ours, but certainly not superior by any stretch of the imagination.

However, attendance at this school comes with a cost of $40, plus lunch fees.  I've no doubt that there will be books and dvd's on sale too, for more ponying of the cash.  While it may seem modest enough, these costs bear another look.  On the second page we see that we are being offered "teaching and training in the gifts of prophesy, words of knowledge and wisdom".  So anyone, regardless of spiritual state (and no one there will be qualified to discern the state of attendees), who forks over the moolah will be "taught" to receive and impart "God's inspired message"?  Can God's gifts be "taught" at the will of mere humans such as Stayne?

With all due respect to everyone involved in the production of this event, it carries the stench of simony.  Because the "charismatic gifts" do not have canonical status, it would be inaccurate to call this event a commission of formal simony, but the similarities are disquieting.

I understand that there will be a "healing service" that Saturday night inside St John Neumann Church.  I pray that it won't resemble this uproar (in the first two videos) that Stayne conducted several years ago (please note how the Tabernacle is repeatedly blocked and continually ignored throughout the ruckus).  Again, notice the over-emphasis on personal experience, as if God is nothing more than a giver of experiences :hence the constant repetition of "let it rain" and "drink".  Following that is another video in which a former "faith healer" sheds some light as to the effects of the music and repetition that you see in Stayne's videos.  In light of the third video, you might see how the first two videos are a case study in the art of crowd manipulation, whether or not Stayne is aware of that or not.  His emphasis on experience, as opposed to simple obedience to Christ through His Church poses much spiritual danger.

Posted by Restore-DC-Catholicism at 9:44 AM