Coming From The Rubble Of The Referendum 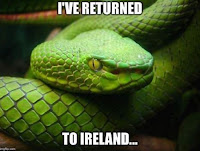 News is coming forth of some Irish clergy who are raising their voices in defense of the Church's teachings regarding life in the wake of the referendum debacle.  Bishop Kevin Doran of Elphin said that Catholics who voted for the repeal while knowing that it would result in abortion being unleashed in Ireland should take their vote to confession.  He stopped short of telling such errant Catholics that they should not receive Holy Communion until they do.  That last waffling was to his discredit.  Now I presume that the ballots are secret, but if any Catholics in his diocese were flagrant in their disregard for the laws of God, I pray that he would have the decency to obey Canon 915 and deny Holy Communion to them until they repent of the public evil they committed.

Northern Ireland was not impacted by last week's vote, although the pro-aborts have that area in their crosshairs.  One Northern Irish priest laid down the law to a couple in his parish that advocate for abortion.  Father Damien Quigley of the Diocese of Armagh told the couple that they'd need to discuss their advocacy with him before he allowed them to be married in his church.  He relayed this message to the couple privately, so one has to imagine that the couple themselves leaked the matter to the public.  They are behaving in much the same way as did Barbara Johnson did six years ago in my parish when Father Marcel Guarnizo denied Holy Communion to her since she was openly engaged in a lesbian relationship.  Now the question remains if the Bishop of Armagh will through Father Quigley under the bus as did Cardinal Wuerl to Father Guarnizo.

Posted by Restore-DC-Catholicism at 11:44 PM