G. K. Chesterton once said "If the world grows to wordly, it can be expected to be rebuked by the Church; but if the Church becomes too worldly, It can be hardly expected to be rebuked by the world."  No, it can't, and these days it isn't.  On the heels of yesterday's disastrous relatio (due in part to the stacked committee engineered by the pope), the Human Rights Campaign released this 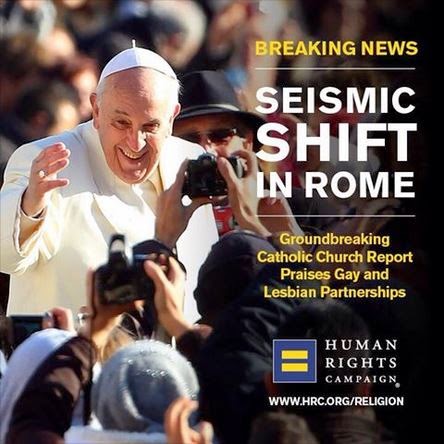 They are rejoicing and gloating over what seems to be transpiring at this SinNod.  They seem to have solid basis for their jubilation.

Many of us understand the trouble that document signals for the Church.  We bloggers made known our concerns yesterday, particularly with those passages that condone homosexual behaviors.  Today's Vortex shows Voris interviewing a panel of the clergy, including Archbishop Bruno Forte, whom many believe was instrumental in the writing of paragraphs 50-53.  I'll post the video now and below that, I'll have more news.

Cardinal Burke sharply criticized the document, stating that it's a "betrayal" that "faithful shepherds cannot accept".  He called upon Pope Francis to issue a statement defending true Catholic teaching on the various topics that were mangled in the relatio.  Bishop Rogelio Livieres also has some well-founded criticism of proceedings.  Cardinal Muller had some pointed language for the thing.

There is something else to consider, and I thank Chris Ferrera for pointing this out.  Yesterday, the date of the release of this relatio, was the anniversary of some key Divine interventions.  It was on this day that Pope Leo XIII had his vision of satan attacking the Church, prompting him to compose some remedial prayers to be prayed after every Mass; these prayers are called the Leonine prayers.  They were scuttled after Vatican II, although noting in the council documents so directed their abandonment.

It was also the 97th anniversary of the Miracle of the Sun at Fatima.  To the three children Our Lady made plain that we must pray and repent else we will be judged.  Did we see some stark sign of that judgment issue forth from the Vatican?  I believe we did.

As we read the comments of Ferrara's piece, a reader points out another anniversary: that of Our Lady at Akita, where she warns of bishops being set against each other, and a strong exhortation to be faithful to the daily Rosary.  None of this is a coincidence.
Posted by Restore-DC-Catholicism at 8:08 PM