Mardi Gras - A Diabolical Insult To The Holy Season Of Lent

Next Wednesday, Feb 10, is Ash Wednesday - the beginning of Lent.  Already on social sites we are seeing reminders and reflections regarding this sacred time of penitence and preparation for Easter.  Of course I frequent the Catholic circles in Facebook and other venues.  That said, I was quite taken aback when I saw the picture on the right. 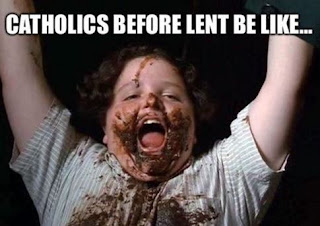 It reminded me of a homily that I heard at least 10 years ago at my church on the Sunday before Ash Wednesday (known as Quinquagesima Sunday in the Extraordinary Rite).  It was excellent.  Father stated that there were mistakes that Catholics often made in their approach to Lent.  He said the first mistake is called "mardi gras".  He said it was indicative of the attitudes of too many Catholics towards the remedial disciplines of Lent: that they saw Lent as a time to be accepted with, at best, a begrudging acceptance as opposed to gratitude.  Such people are, at heart, willfully attached to their pleasures and comforts.  They tend to not take seriously their eternal destinies, seeing little need to prepare for death, judgment and either heaven or hell.  Hence they observe Lent grudgingly, often lamenting the temporary reduction of pleasures.

Another time when I've seen such attitudes is when St. Patrick's Day has fallen on a Lenten Friday.  Hankering for their meat on Friday (as if there weren't 6 other days of the week), they've often petitioned their bishops for dispensation from the lenten practice on those Fridays.  All too often, the bishops themselves don't take lent seriously so they blithely let them have their way.  When that happened one year, I might have thought they were acting like naughty children who had gotten permission to raid the cookie jar at will; their gloating was that ridiculous to behold.

Take a look at the language in the picture.  Leaving aside the sloppy grammar, what we see here is an insult to faithful Catholics - and to the holy season of Lent.  It is an illustration of the careless Catholic who accepts Lent only with resentment.  The person in the picture has made himelf into a disgusting slob.  That is indeed what happens when one does not approach Catholic life and discipline with the reverence that it deserves.  One one takes a cavalier, jocular attitude towards the provisions that the Church has provided for our salvation, we degrade ourselves.

The Catholic writing this post will not align herself with the nod to gluttony suggested in this meme.  I trust many of you are like-minded.

Posted by Restore-DC-Catholicism at 11:05 PM