All over the United States, the would-be Gestapo chieftans are unmasking themselves.  They no longer pretend to be interested in their oaths of office.

So are all of these actions designed to "protect the citizens", OR, are they designed to punish those who won't blindly follow the dicates of increasingly tyrannical governmental officials?  I think the latter.  Moreover, I think there is design afoot to alienate today's Americans from their own national heritage, their families, and knowledge of their God-given rights as guaranteed by the United States Constitution.

Catholics all over the world have been subject to this systematic attempt to erase from their consciousness their Catholic history, dogmas, Sacraments and ultimately their knowledge of Jesus Christ Himself.   That's why Holy Mass has been banalized into a sappy and insipid feel-good jamboree.  That's why Catholic education has been inundated with politically correct mantras while stripped of the teaching of the Catechism.  Most recently, we have seen bishops outdo the civil authorities in the denying of the Sacraments to the faithful, heretically alleging that physical health is just as important (if not more so) than spiritual health.  Recall too how a week or so ago, the pope, for "fraternity" was urging pagans to pray to their demon-idols to free us of covid.

Archbishop Vigano recently retierated the warnings given in the appeal that he and many other Catholics have signed to warn of the dangers of the so-called "new world order".  Consider that this "new world order" can only occur if citizens of individual countries are brain-washed into disregarding their own national heritage and even adherence to the One True Faith 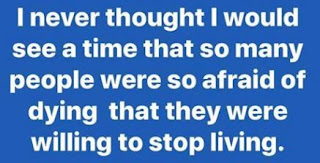 Atrocities such as the ones described above continue to be hurled at us - not only from would-be tyrants but also faithless prelates.  Connect the dots.  We are being told that we should jettison our heritage, both as Catholics and US citizens, on the arbitrary say-so of governmental dictators.  Government knows best, you see?  Not faithful Catholics, not US citizens, for they are just sheeple!  We are being primed and prepared to swallow the New Age, New World Order.  I don't know what frightens me more - the agents of the police state, or the dumbed down people who are actually clamoring for task-masters to put nooses around their necks.

Posted by Restore-DC-Catholicism at 12:09 AM