Today the president acknowledged that churches, synagogues, mosques are "essential" and ordered governors to cease their lockdowns of worship.  He further added that if they fail to do so, that he will override them.   In Maryland, I don't know how that will pan out, since Hogan has largely punted that question to the counties.

Isn't it a sad commentary on the faith (or lack thereof) of our bishops when a civil leader understands the importance of prayer to God but the bishops exhibit, at best, a blase attitude towards worship of God?  The Minnesota bishops and some Protestants are a happy exception to that mindset, but their numbers are few and far between.

Even now, the left is working to undermine Trump's defense of freedom of religion.  I will post now a screenshot of a post by dissident Fr James Martin. 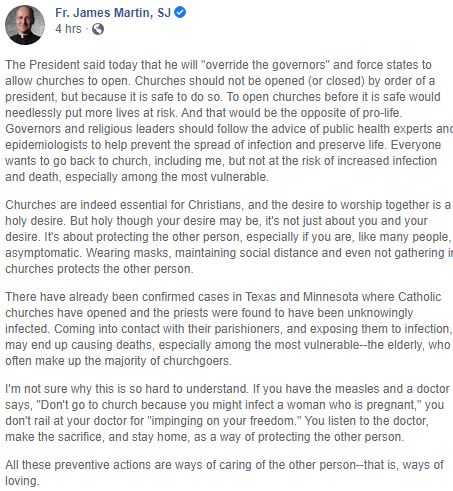 Just look at the first two sentences of the screed and notice the logical disconnect.  He is deiberately twisting the meaning of Trump's words to the governors to imply that Trump is ordering the churches to reopen.  Nothing of the sort is happening.  Churches may well believe that they should remain closed.  No one is forcing them to open.  But by the same token, the First Amendment prohibits government from forcing them to shutter.  That is what Trump is addressing.  Either Martin has some problems with basic reading comprehension or he's being disingenuous.  Let's cut to the chase; it's the latter and he just got caught with his hand in the cookie jar on that one.

So either the govenrors will remember that they are sworn to uphold the United States Constitution (refer to First and Fourteenth Amendments), or President Trump will protect US citizens from overbearing governors and local bureaucrats.  Once that happens, we will hold the bishops' feet to the fire.  Bishop Schneider had some choice words for those withholding the Sacraments, calling them "fake shepherds".  He couldn't be more correct.  Those words apply to Archbishops Gregory and Lori in my locality.  I'm just thankful that there are pockets of sanity in my area, but again I'm looking at several hours on the road because our prelates fear Hogan, Bowser, and Northam more than God.
Posted by Restore-DC-Catholicism at 10:41 PM